The AF1 50 of 1986, type AB characterized by the homologation code OM 52107, is the first real small road bike designed as a motorbike of larger displacement. Until then, the only serious proposal was the 1984 Malaguti RGT which, however, had an antiquated line with outdated equipment.

Of the Italian manufacturers of small displacement motorbikes, Aprilia has always been the most attentive to the fashions of the moment and the most active in presenting a young product that appeals to young people. The small AF1 is therefore an absolute milestone in this sense.

The AF1 is a bike that wants to excite immediately and it starts to do so right from the name. In fact, AF1 means "Aprilia F1", where "F1" is a clear reference to the world of motor racing. An Aprilia marketing idea that links the term F1, which means engineering excellence, to the name of the house of Noale.

The styling of the little AF1 is really beautiful and the vibrant white/blue/red colour scheme really offers something new to the 14-year-olds of the time. During 1987, a second red/black colour scheme also arrived. The price in 1986 is 3,280,000 lira for the full optional version with rear disc brake and electric starter. (Lire 2,980,000 for the basic version with rear drum brake and kick starter).

The chassis of the AF1 50 is truly remarkable. Never before has a simple fifty been so daring.

The perimeter steel frame immediately suggests the performance it is capable of handling is well above code speed. The suspension makes use of an Aprilia 30 mm fork and a rear shock absorber combined with the APS suspension working on a steel swingarm. The braking system makes use of a 220 mm front disc and a 220 mm disc (or 118 mm drum) at the rear. The lenticular wheels are 16" at the front and 17" at the rear.

The engine is the familiar Minarelli RV4 four-speed liquid-cooled lamellar intake engine characterised by a thermal unit designed to Aprilia specifications. The same thermal unit that also equips the Etx and Tuareg enduros. A further distinguishing feature compared to the competition that uses the same engine, but with a "basic" thermal unit. 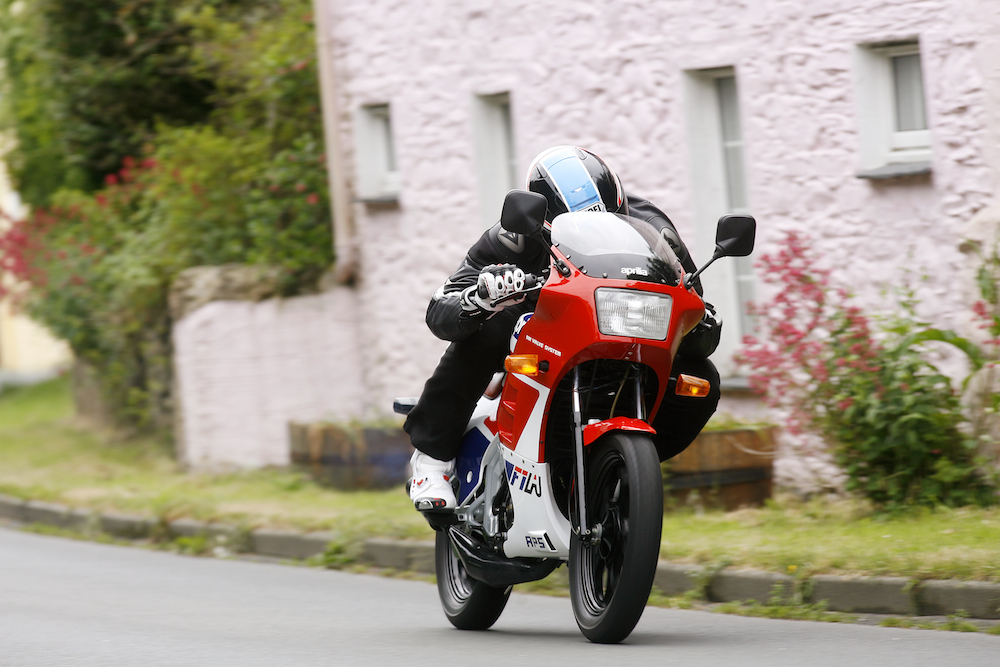 Two years after the presentation of the AF1 50, in 1988 Aprilia radically renewed its road-going 50, which now resembled its bigger sister, the Sintesi 125, in every way.

Curiously, the new AF1 50 '88 adopted the name of the AF1 125 '87, i.e. Project 108. A reason probably to be found in Aprilia marketing's desire to emphasise the adoption of the single-sided swingarm (called "Project 108"), which was adopted for the first time on a small fifty.

Only one colour is available and the price is Lire 3,350,000 with, unlike the previous version, electric starter and rear disc as standard.

There are many changes compared to the AF1 '86 and indeed the new AF1 50 comes out as a brand new model. Basically, only the Minarelli RV4 engine and the instrumentation remain unchanged. Let's see the changes adopted: 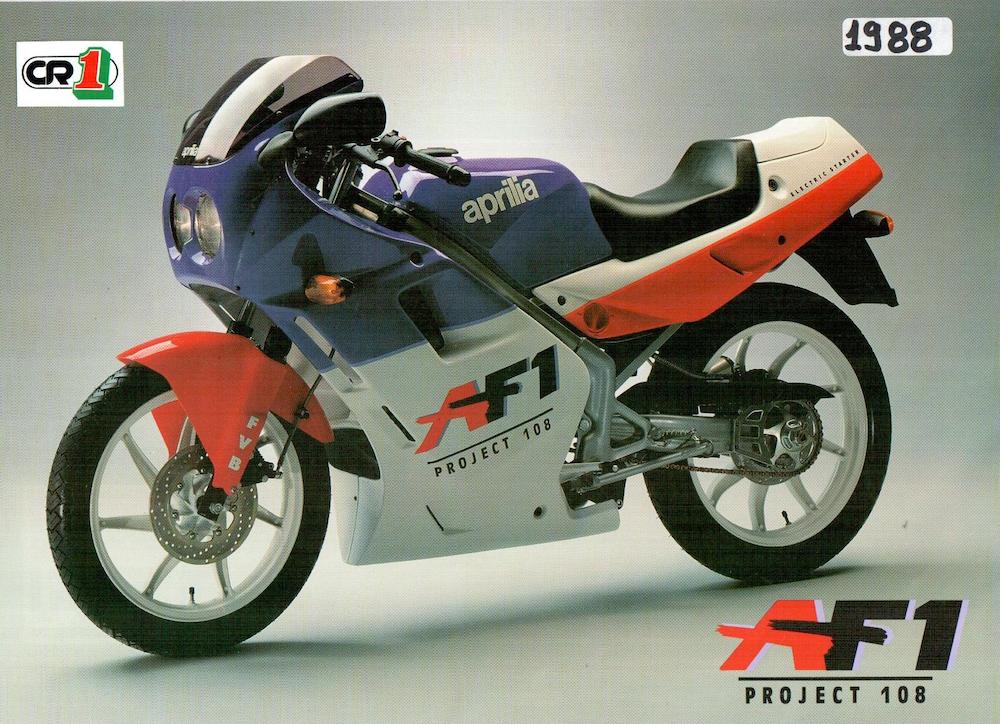 The AF1 50 '89 once again takes up the lines of its bigger 125cc sister and for the first time is also offered in a Replica version, dedicated to the Belgian De Radigues who replaces Loris Reggiani for the '89 season.

The replica colour was not the only one on offer, however, and in fact a white/red colour was introduced that echoed that seen on the previous version. The price in 1989 is 3,640,000 liras with electric starter included.
Compared to the previous model, the changes are concentrated in a new and sportier Veglia Borletti instrumentation that is practically identical to that mounted on the 125 and a new large diameter front brake disc.

The engine is adapted to the new Code regulations that now limit the number of gear ratios to three and a new power unit is adopted. The Minarelli engine is updated and renamed RV3.
Let's take a look at the changes made:

Probably to dispose of the RV4 engine banks, on several RV3s, the fourth gear is simply locked. On newer RV3s, it is removed completely. Therefore, to find out if the gear exists or not, simply shift the transmission into third gear and 'search' for the top gear by trying to move the gear lever. If the lever moves up, without obviously engaging the gear, it means that the fourth gear cog is present and locked. If, on the other hand, the lever does not move, then the gear has been removed.