125stradali.com would like to thank our friend Stefano, author of a beautiful Blog dedicated to the Aspes Juma, Yuma and Criterium, who kindly cooperated with us to create a wonderful article about the Aspes 125 stradali that so many guys dreamt of in the 70s. For 125stradali this is also the first time we have ever featured an air-cooled 125, having only specialised in liquid-cooled 80s and 90s machines. So we are happy to have broken our rule, because the Aspes really deserve it.

Founded in Gallarate in the late 1950s by Teodosio Sorrentino, the name Aspes came from the abbreviation of his wife's surname (Aspesi). The company started out as a bicycle manufacturer, but in 1961 it began building classic utility mopeds such as the Falco. The range was quickly expanded for young people with the Sport (1964) and Sprint (1966) models, powered by a two-stroke Minarelli P4. In 1967, a version called the Cross T (Cross Teodosio) was developed on the basis of the touring model. This represented Aspes' first attempt to enter the off-road motorbike segment, which was particularly popular with young people in those years.

The Cross T achieved a lukewarm success, enough to push the company to insist on the project and produce the Cross model, leading to the production first of the "Cross Special '68" and then of the "Cross Special '69", which were distinguished from other contemporary products by the modernity of the solutions adopted and the quality of the components used in their construction.

1970 saw the presentation of the Apache 125, with which Aspes inaugurated the tradition of naming its models after American Indian tribes. The bike is distinguished by the adoption of the Ceriani racing forks, the swingarm mounted on elastic bushings, the sturdy drawn steel frame and the 18 HP Maico rotating disc engine that make it a very competitive vehicle used by private racers. The most important novelty, however, was the entry into the company of Piermario Sorrentino, Teodosio's eldest son and a great fan of speed racing. At his insistence, Aspes started to modernise the stradali mopeds, putting the Super Sport model into production and launching a rather ambitious project to build racing bikes that would be able to compete in the Italian Junior Speed Championship.

On the wave of the first sporting successes, obtained with the Cross Special 71 model by Felice Agostini (younger brother of the multiple world champion Giacomo), Aspes presented at the 1971 Milan Motor Show the Navaho, a motocross moped that was a great success among the very young, thanks to its angular and essential superstructure (made of fibreglass) painted in bright metallic colours. In the same exhibition, the 125 Juniores Velocità track prototype is also on display. This was fitted with the first Aspes engine, designed and built by the well-known technician Gianfranco Maestroni, who was taken from Yamaha Italia.

Some prototypes of the new engine were also mounted on Apache chassis and, after long phases of study and testing, Aspes decided to produce the 125 cm³ engines on its own, founding the associated company ASCO (acronym for Aspesi Consiglio) which incorporated the mechanical workshop of engineer Vito Consiglio of San Martino Siccomario, the architect of the development and industrialisation process.

In 1972 the Hopi 125, heir to the Apache, came onto the market. Contrary to the majority of manufacturers in the sector, Aspes decided not to use the Sachs engine, but to build its own engine. The Hopi achieved some success in Cross, while in Regularity it suffered from a not very tractable engine.

In 1973 the Gallarate-based company presented the Juma, a 125 road bike with an engine derived from the Hopi, at the Milan Motor Show. The bike went into production in 1974, achieving good success in France, where under the BPS importer banner it proved unbeatable in competitions for production bikes. The Juma would prove to be the fastest 125 on the market (135 km/h top speed). 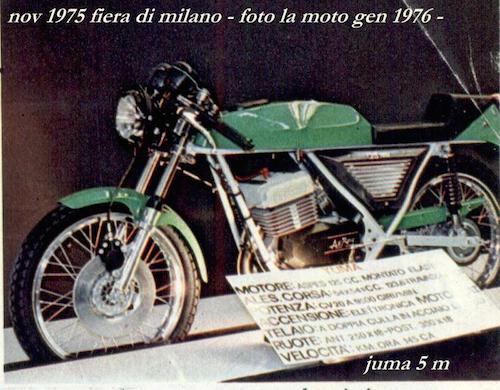 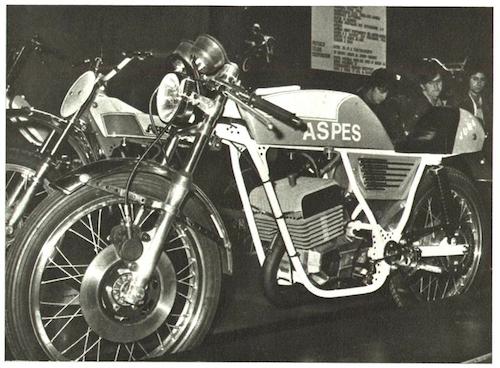 In 1977 the "Criterium Monomarca Aspes Yuma" was launched, the first example of a single-brand trophy in Italy, which ran until 1979 and gave many young riders (Loris Reggiani, Fausto Gresini, Maurizio Vitali, Davide Tardozzi and others) the chance to emerge.

However, the end of the seventies marked a decline for Aspes: the Navaho had lost its stylistic originality a long time ago, the Hopi had little success (due to an engine more for Cross than for Regularity), while the Yuma was the fastest in its category, but also the most expensive. The Gallarate-based company tried to remedy the situation by proposing traditional mopeds (the "Sioux") and a 125 cc less powerful than the Yuma (the "Yuma TSB"), both of which were very unsuccessful.

The Aspes adventure ended in 1982, when Unimoto (founded in Cesena in 1980 from the ashes of Milani) took over the Gallarate-based company, using the Aspes brand until 1984 before ceasing operations in 1986.

The idea of a 125 cc road bike was born in Aspes at the beginning of the 1970s, thanks to Piermario Sorrentino, son of the owner of the Gallarate company. Together with Gianfranco Maestroni, a technician working for Aspes, he created a competition bike in 1971 by combining a Cr-Mo tube frame with an engine taken from a Hopi motocross bike, tested by Felice Agostini.

The project was momentarily shelved, only to be resumed a short time later: Aspes realised that the market - dominated at the time by the phenomenon of regularity motorbikes - did not have a sporty 125 available. Another factor that led to the creation of the bike was the request from the French BPS for a model that could be used in competitions for production motorbikes, very much in vogue on the other side of the Alps. The final result was presented at the Milan Motor Show in 1973, and production began for the transalpine market the following year, under the name BPS. In Italy, production only started in 1976. 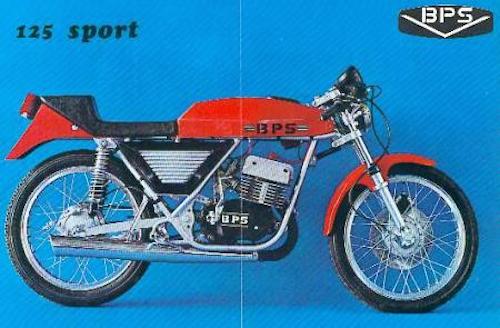 The Juma has a sporty and aggressive line, to which contribute the single seat, the two half handlebars, the rear footrests and the elongated tank with chin guard for the rider to lie on the tank. Unique to the category is the steering damper under the lower fork plate. All of this is embellished by a series of machining and small parts that are closer to a handcrafted motorbike than to an industrial product: in particular, one notices the aluminium used for the instrument panel, the sports footboards and the self-locking nuts used a bit everywhere. The Juma is also light, weighing about 95 kg.

The engine (single-cylinder two-stroke) has characteristics of a racing bike: "empty" below 5,000 rpm, it gives its best from 7,500 rpm, reaching 11,000, and pushes the Juma to over 130 km/h. Equipped with electronic ignition and a six-speed gearbox (five-speed on the very first series with wire wheels), the Juma engine is fed by a Dell'Orto PHBE 32 BS. (30mm on the very first 5-speed series).

The road holding of the Aspes is excellent thanks to the valid double cradle closed frame in steel tubes, to the suspensions that see at the front a Samfis fork of 32 mm (basically a Ceriani) and at the rear two Marzocchi shock absorbers adjustable on 5 positions, and to the brakes with a valid Grimeca disc of 260 mm at the front and an honest drum of 160 mm at the rear. The wheels are both 18″. 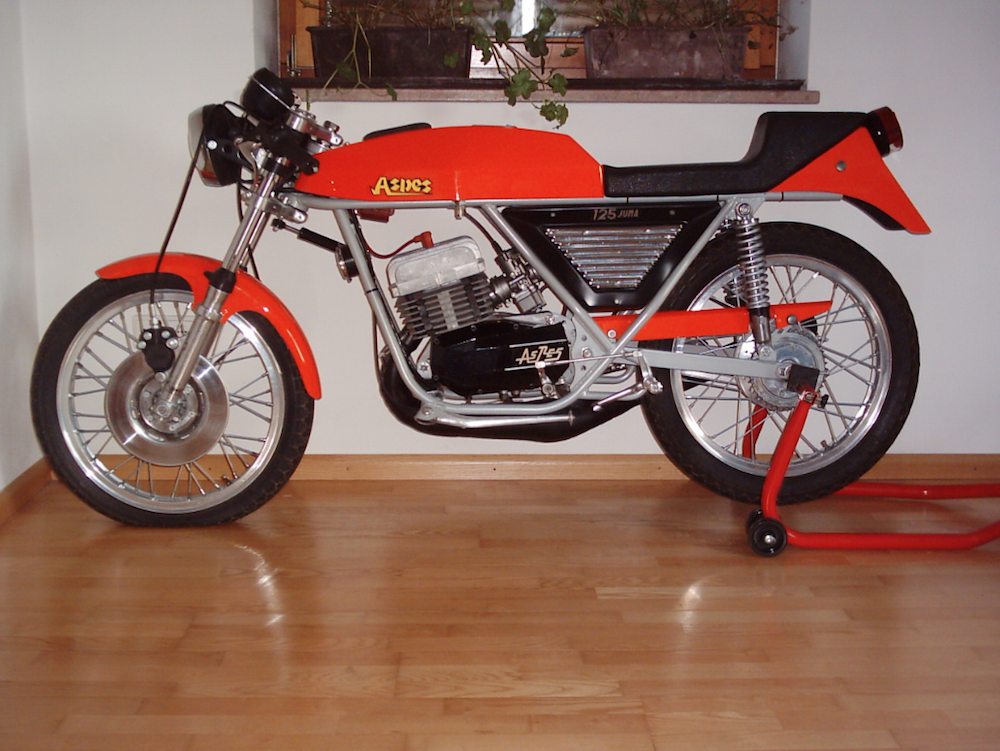 In the course of production, the Juma was updated with new Grimeca 7-spoke light alloy wheels and the engine was given a gold-coloured crankcase. 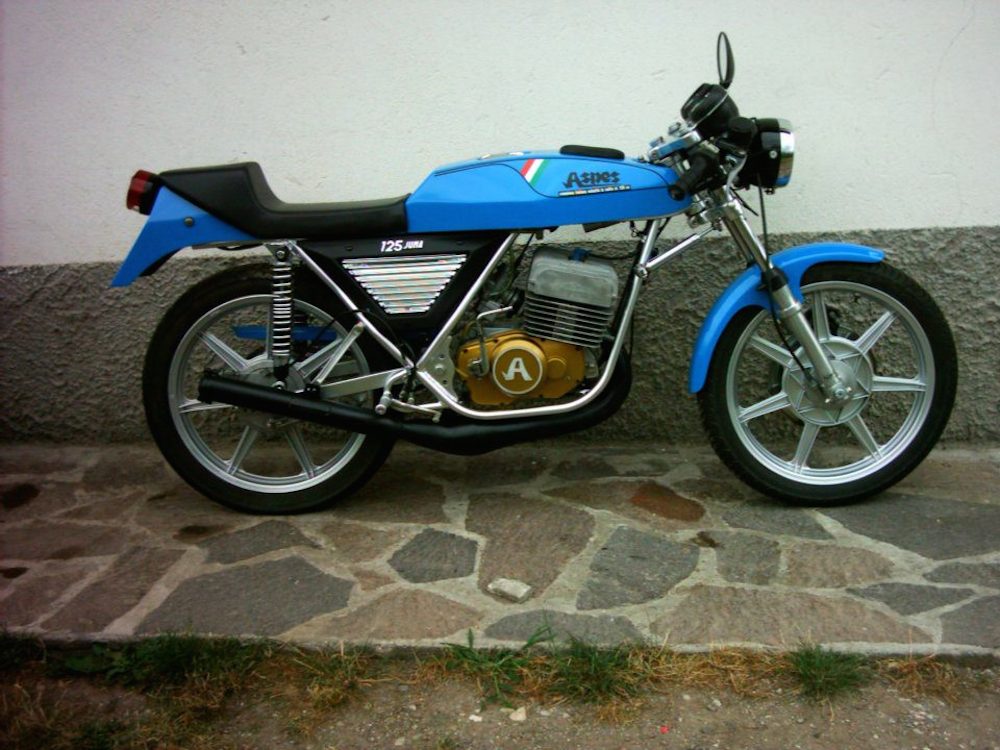 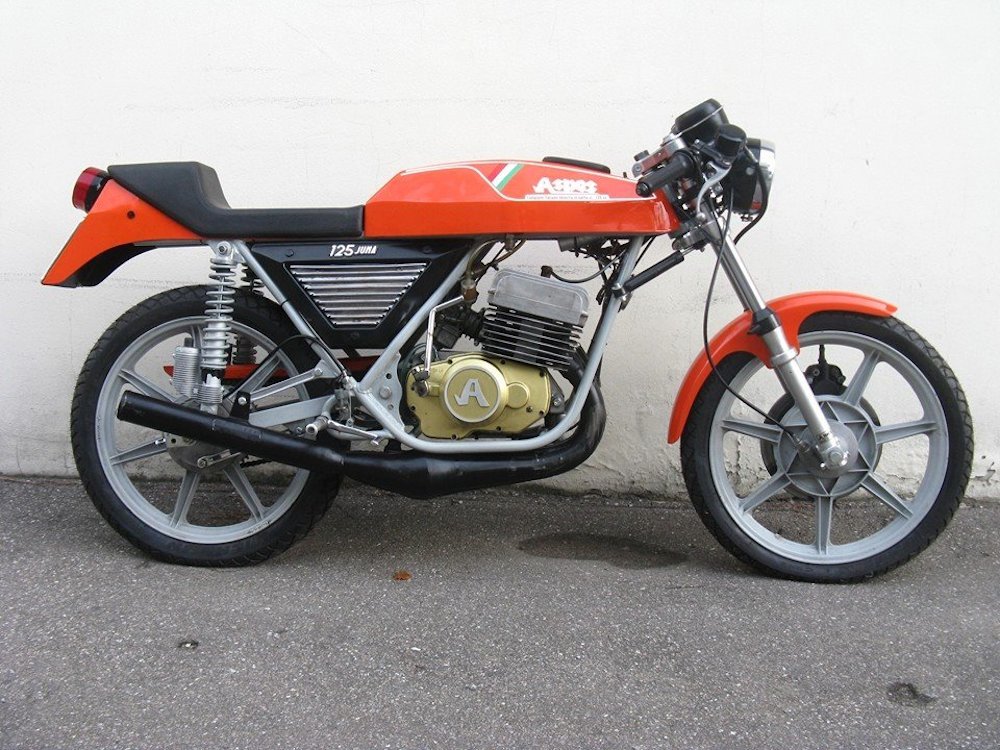 In 1979 the Juma changed its name to Yuma and adopted a new frame that allowed the fitting of a new single fibreglass superstructure incorporating the tank, side panels and tail which gave it the nickname 'monocoque'. A fairing can be fitted on request. The previous equipment is still available on request.

In the course of production, after 1980, the Yuma gained production updates with a monocoque with separate fuel tank and a new engine with a different thermal (tested on the Hopi Cross bikes) featuring a cylinder with radial cooling fins that made it reach 20 real hp at 10,000 rpm, bringing it close to 140 km/h and thus confirming it as the fastest (and most expensive) road 125 on the market. The crankcases are now grey. 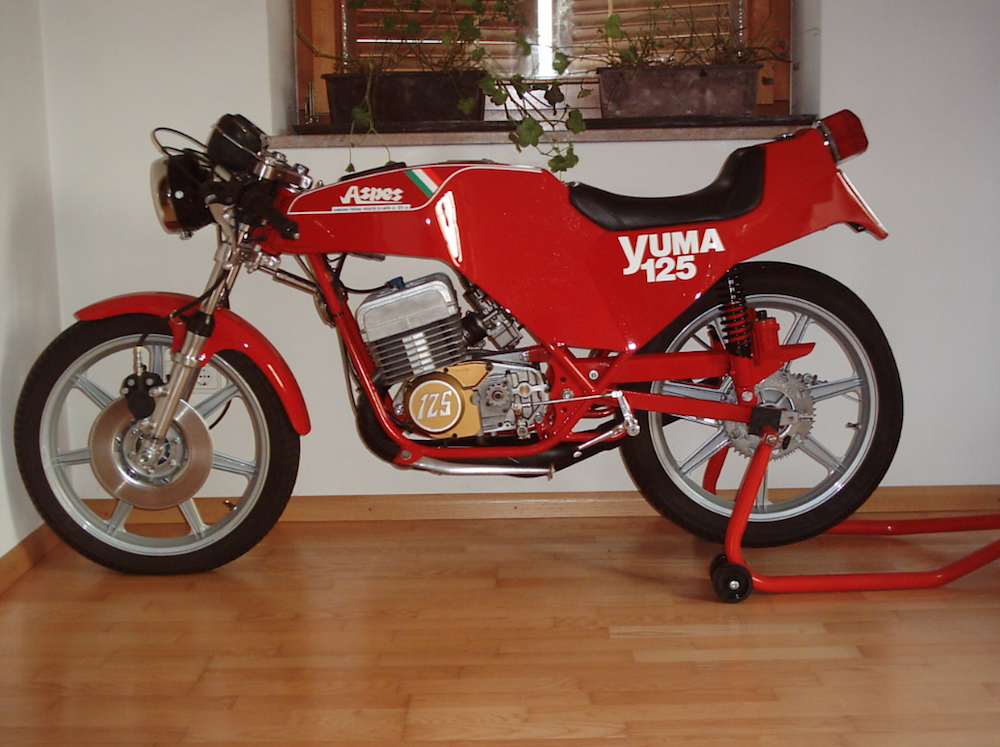 In an attempt to revive an increasingly shaky company situation, Aspes presented at the 1979 Milan Motor Show a quieter and cheaper version of the Yuma, the Yuma ts.b, powered by an engine derived from a Minarelli kart. Marketed from 1981, the "ts.b" (or "TSB") failed to attract potential buyers, helping to accelerate the closure of Aspes, absorbed in 1982 by Unimoto, a company from Romagna born from the ashes of Milani.

The differences between the Juma and Yuma chassis.

The Juma adopts the so-called "narrow frame" because at the top under the tank and under the tail it has the same width. The engine mounts are of the elastic type; front with silentblock and rear anchored with a support to the swingarm pivot. There are two variants of these frames: with a single front silentblock in the early models and a double silentblock in the later ones. During production, the location of the bracket that holds the muffler to the frame also changed.

The frame on the later Yuma monocoque underwent changes in width under the tail seat, although the rear suspension attachments remained in their position, and the final bow under the tail was increased also to accommodate the new configuration of the body (monocoque); in the side triangles of the frame, where the filter box was housed in the Juma, there are now two cross brackets where the monocoque is screwed, while a new reduced air filter box and battery support are located internally.

The most important change concerns the engine mounts, which are no longer elastic, but rigid. At the front there are now two brackets that hold the engine to the frame and at the rear the engine is no longer anchored to the swingarm pivot, but still to the frame.

There are two variants regarding the position of the side stand in the early monocoque versions, further forward in the cradle of the frame with an aluminium stand and later further back with an iron stand. As is typical of Italian production of the period, there are intermediate versions produced between one series and another, where interesting combinations can be seen, such as "narrow frame" but with rigid engine mounts.

The differences between the engines
The Juma and Yuma engines have an engine block marked SP, which means road-track (on Cross-Regularity it is marked CR). In fact, this engine is also used in the Criterium Trophy 77-79. The SP engine is fitted with a thermal unit known as the "square head", due to the shape of the thermal unit, which during the design phase received a strong oversizing of the cooling fins. The cylinder has four transfers. 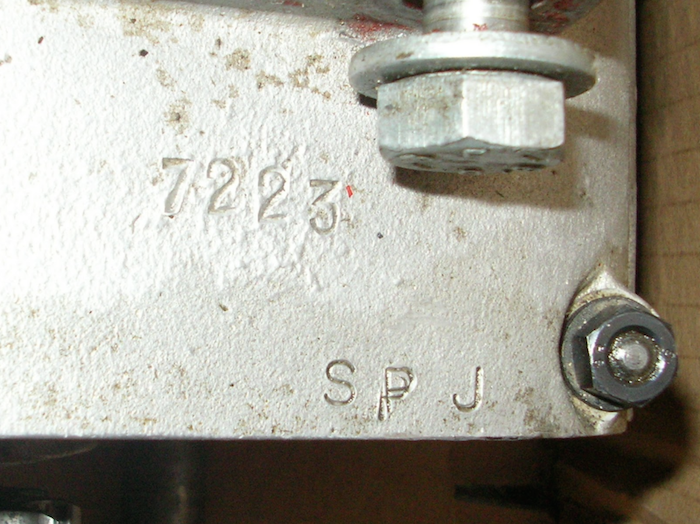 Subsequently, when Yuma monocoque production was already well underway, a new engine block bearing the YHF trademark was used, with different crankcases at crankshaft level. Also new is the thermal system, which now has a cylinder with radial cooling fins, five transfers and a more powerful distribution diagram that increases power compared to the previous cylinder. On the latest series, the crankcases become grey in colour. 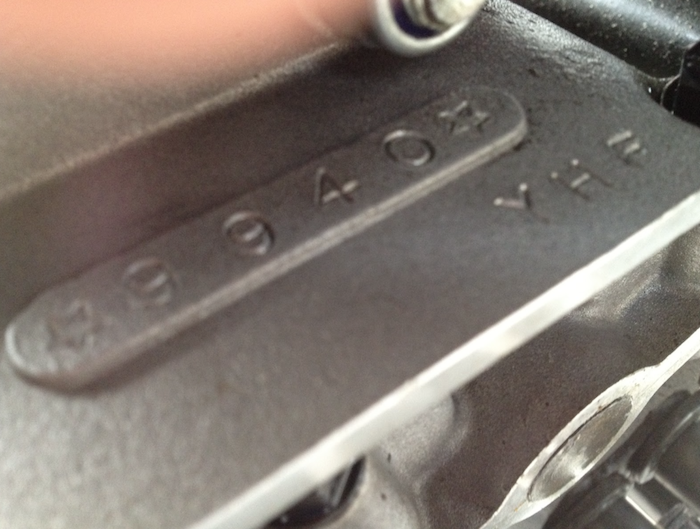