1985 - GOLD FLAP S1
Presented at the Bologna Motor Show in December 1984 and marketed shortly afterwards, the Aletta Oro S1 took up a historic name: Aletta was in fact a famous 125 built in the Sixties by the then Cagiva-Harley Davidson and Ala d'Oro were the fast single-cylinder Varese bikes destined for private riders. The S1 immediately stands out for its aggressive lines [...]

1986 - GOLD FLAP S2
Presented in Schiranna in April 1986, the Cagiva Aletta Oro S2 differs from the previous S1 mainly in the adoption of the electric starter as standard. The price in 1986 is 4,398,000 liras turnkey and the colours adopted are: white (white wheels), white with blue and red stripes (black wheels) and white/gunmetal (white wheels).

1987 - ARROW C9 - type 5P
Presented in April 1987 and marketed immediately afterwards, the Cagiva Freccia C9 is a totally new bike compared to the previous Aletta Oro. Realized by the mythical Massimo Tamburini, the Freccia is clearly inspired by the Ducati Paso, the first motorbike that sealed the collaboration between Tamburini and the Castiglioni brothers: a long-lasting collaboration that led to the rebirth of the [...]

1988 - FRECCIA C10 R - type 5P
Presented at the Bologna airport on 6th April 1988 and marketed immediately afterwards, the Cagiva Freccia C10 R replaces the Freccia C9 presented the previous year. 1988 is an exciting year for the 125 stradali and sees the competitors of the Varese-based manufacturer presenting completely new models such as the Aprilia AF1 Sintesi, the Gilera MX-1 and the [...]

1988 - FRECCIA C10 R ANNIVERSARY - type 5P
During 1988, Cagiva introduces the Freccia C10 R Anniversary, a limited edition of the C10 R designed to celebrate its tenth anniversary. Marketed only in a new red and white livery, the Anniversary introduces several improvements compared to the C10 R and not only with the aim of making it a more refined version [...]

1989 - FRECCIA C12R - type 5PE
Presented at the Bologna Motorshow on 3rd December 1988 and marketed from March 1989, the Freccia C12 R adopts most of the technical solutions already seen on the limited edition C10 R Anniversary. For the second year in a row, Cagiva differentiates itself from its competitors by presenting an update of an existing model, rather [...]

1990 - FRECCIA C12 SP type - 2B SP 125
Presented at the Milan Motor Show in November 1989 and marketed immediately afterwards, the Freccia SP was a limited series version dedicated to racing in the Italian Sport Production championship. Produced in about 1000 units (we have no confirmation) in the Lucky Explorer livery only, the SP maintains the appearance and the chassis of the C12R, but adopts the [...]

1990 - MITO '90 - type 8P
Presented on 18th May 1990 in the setting of the Gran Premio delle Nazioni at Misano Adriatico and marketed from June, the Cagiva Mito is, pardon the pun, a true myth. To quote President Claudio Castiglioni "Motorcycles are objects that make you dream. They have different colours and sounds, they have shapes that reveal [...]

1991 - MITO '91 - type 8P
For 1991, Cagiva keeps in the list only the Mito carenata that in substance doesn't undergo any changes compared to the '90 model. On the contrary, new colours are introduced to join the classic fire-red version (presented in 1990) with white rims: an alternative and quite original aquamarine green with mirrors and rims in the same colour and a new [...].

1991 - MITO DENIM - type 8P
Realized for a contest for the homonymous brand, the Denim is a limited edition of the Mito '91 realized only in the particular white livery that characterizes it in only... 300 or 500 pieces? Initially Cagiva thought to produce 300 pieces in limited series + 1, that is the bike that the lucky winner of the contest would have brought home. [...]

1991 - MITO RACING - type 8P
Presented in December 1990 at the Bologna Motorshow and marketed in early 1991, the Mito Racing, also known as Lucky Explorer, was the natural evolution of the previous Freccia C12 SP. Proposed only in the Lucky Explorer livery, the Racing represents the intermediate step between the basic Mito and the specialistic SP (see data sheet). 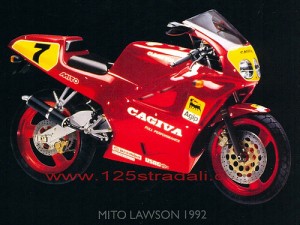 1992 - MITO EDDIE LAWSON REPLICA '92 - Type 8P
Presented at the Milan Motor Show in November '91 and marketed immediately afterwards, the Mito Eddie Lawson is the first official replica produced by Cagiva for a 125 road bike. With a new red livery characterized by yellow number plates with the number 7 of the American ace and the stickers of the various technical sponsors, the new Mito is a [...]

1992 - MITO '92 - Type 8P
Introduced and marketed in early 1992, the second series of the Mito (also known as Mito II) was an update of the previous version. While maintaining the beautiful line unchanged, the adoption of new upside-down forks, of an even more exuberant braking system and of a new front mudguard contribute to make the Mito more [...].

1993 - MITO '93 - type 8P
The '93 version of the Mito was actually born and marketed towards the end of 1992. The marginal changes introduced were limited to two small additional air intakes inserted in the fairing, while the chassis remained unchanged. The engine, instead, gains a new thermic group (cylinder code 73037), the primary transmission with straight teeth 22/72 and ratios [...].

1994 - MITO EV
Presented and marketed from May 1994, the new Mito Evoluzione faithfully reproduced the lines of the splendid Ducati 916 designed by Massimo Tamburini, who also designed the Freccia C9 and the older sister Ducati Paso. Replacing a successful model such as the previous Mito, which in four years of production had a phenomenal commercial success [...] 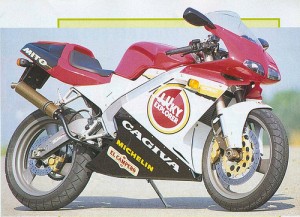