Garelli was founded in Sesto San Giovanni, in the province of Milan, back in 1919. Production was mainly concentrated around the "350" and then gradually shifted to equipment for military use such as motocompressors and generators, to such an extent that by the end of the 1930s Garelli was no longer mentioned in the list of Italian motorbike factories. Once the Second World War was over, the great need for economical means of transport that afflicted the country shifted the attention of the vast majority of companies previously involved in the war to the production of small motorbikes. So in 1953 Garelli returned to the world of two wheels with the Mosquito, an innovative 38.5 cm³ auxiliary engine intended to equip common bicycles.

In 1961 Agrati and Garelli merged, two companies that were already working closely together. In fact, Agrati bought engines for its scooters from Garelli, while Garelli bought frames from Agrati and had them assembled. In the 1960s production saw the birth of models that would make the Garelli brand (which essentially replaced the Agrati brand) extremely popular on mopeds such as the "M" model (like the Mosquito), which would later be transformed in 1969 into the famous and very popular Gulp. In the 1970s came the VIP and the Ciclone, which capitalised on the fashionable phenomenon of the big tubes, which were very popular among young people in those years.

Garelli's production had always been mainly focused on mopeds, except for a few enduro models. With the beginning of the 80's and the great passion that moved Daniele Agrati, it was decided to take the step towards a real motorbike production. Between the late 70's and early 80's, the 125 class was the most popular in our country, with well over one hundred thousand units registered each year and then the management shifted its attention to a new project that would compete with the best 125 stradali of the time, so the Garelli TSR 125 of 1983 was born. The new eighth of a litre equipped with a Minarelli engine with liquid cooling with thermosiphon circulation, a technology already adopted since 1977 by Zundapp for the engines equipped on its KS and Laverda LZ, was however certainly not at the top in terms of performance and also the chassis was rather predictable without particularly innovative solutions. The TSR was therefore a discreet commercial failure, given that 125 stradali such as the Aprilia ST, Cagiva SST, Fantic Strada and the evergreen Laverda LZ, were superior to it in practically every aspect. 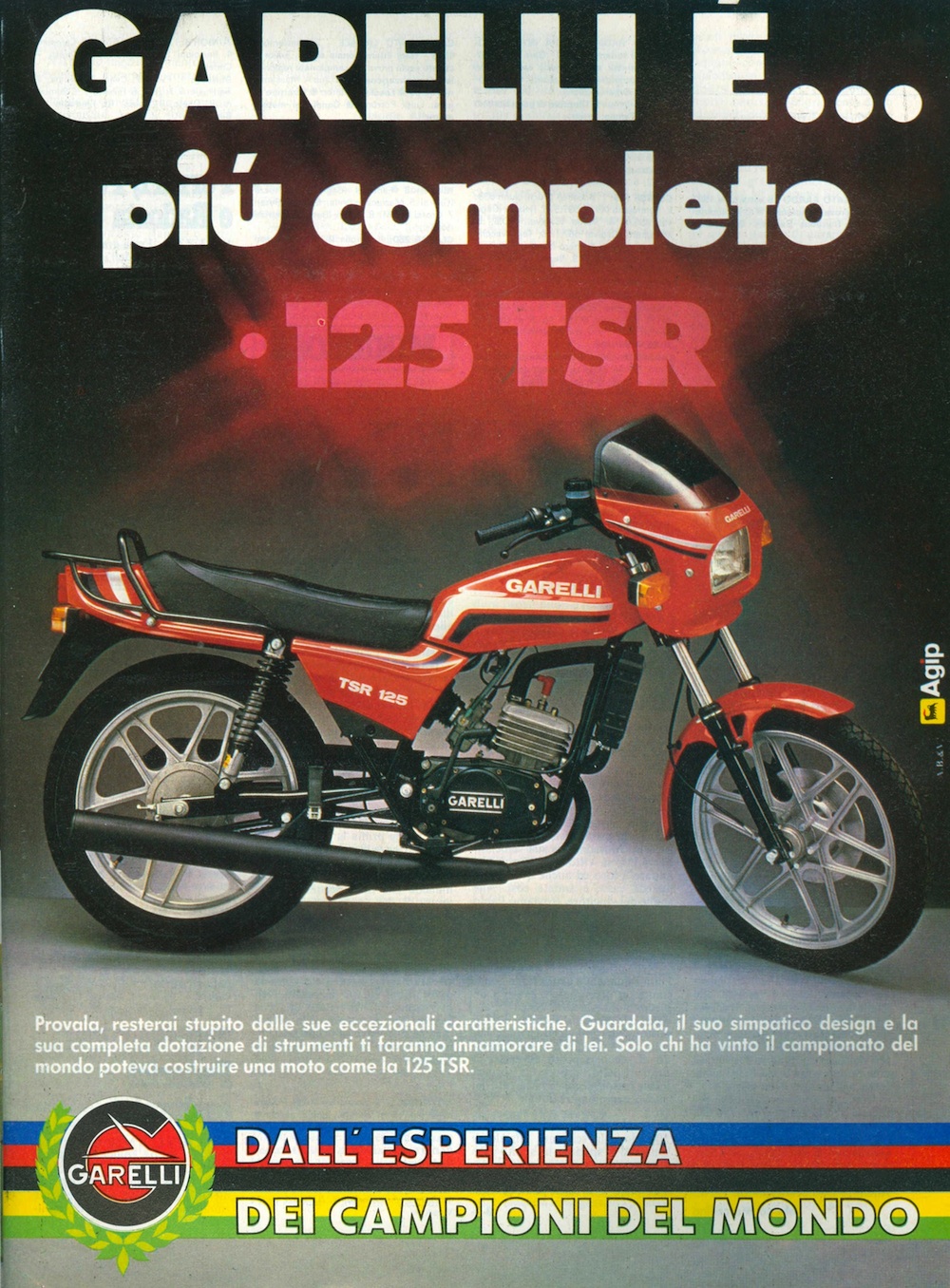 Perhaps galvanised by the success it was beginning to reap in the World Motorcycle Championship with the twin-cylinder GP 125 (from 1982 to 1987 the Garelli 125 GP brought home four manufacturers' titles and contributed to the conquest of six riders' titles by Angel Nieto, Fausto Gresini and Luca Cadalora), the company decided to raise the bar by presenting a new 125 road bike at the Bologna Motorshow in December 1984, equipped with the Hiro two-stroke engine, already introduced on the XR Tiger enduro presented a year earlier. The GTA 125 was born, Garelli type code 0121.

The GTA had a very attractive line that respected the aesthetic canons of the moment dictated by the Japanese companies that in the early 80's imposed on the market the fashions to which most of the Italian manufacturers of 125 were aligned. The gritty colours initially proposed, red or black, enhanced the sporty image of the new born and accomplice the quality of the equipment used, the GTA was a clear step forward compared to the previous TSR. In 1986 a third colour scheme in grey followed, alongside the red and black already seen, and from 1987 two bold Fausto Gresini Replica colours arrived. 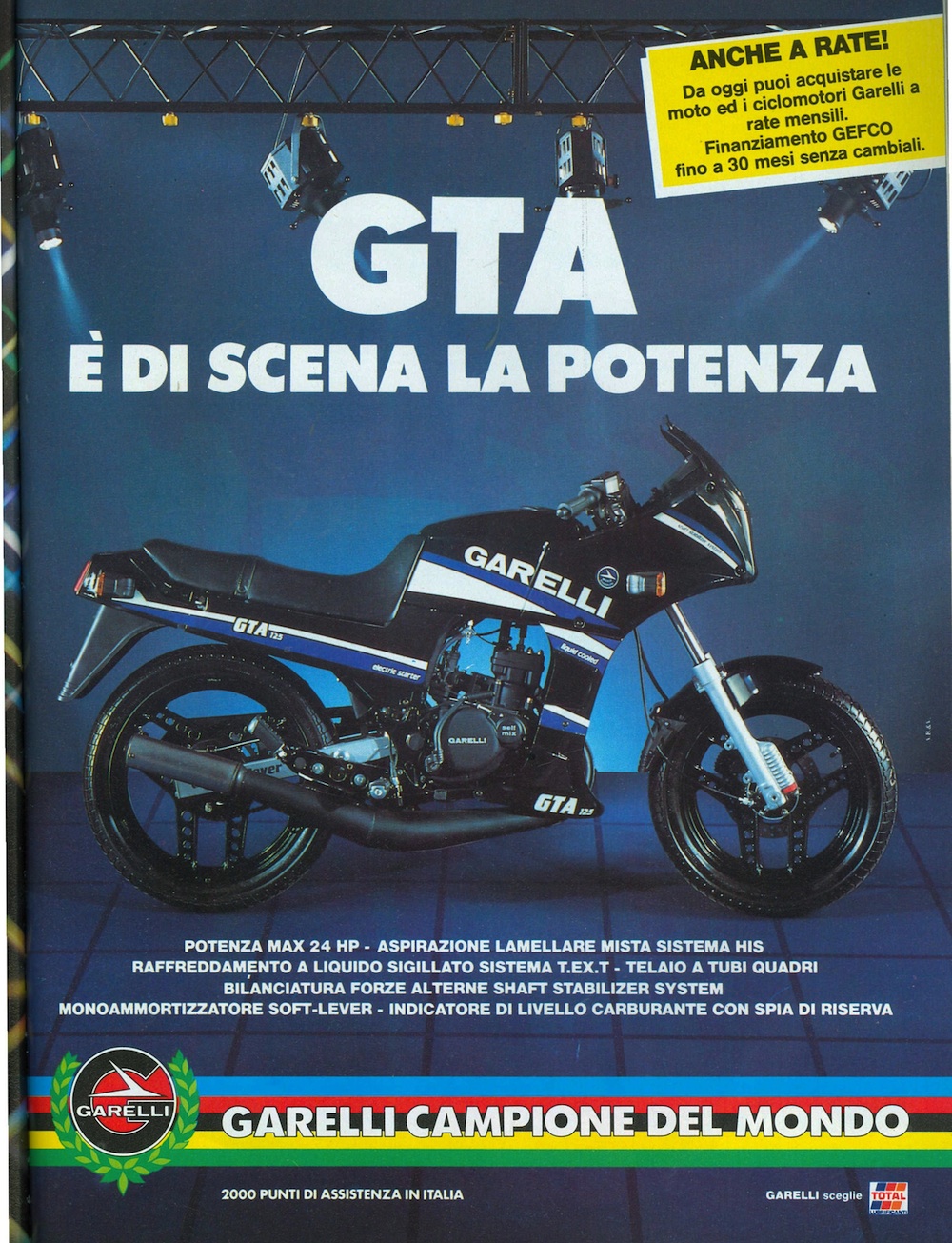 The controls on the handlebars were well cared for and had the merit of integrating the electric blocks and the front brake pump, giving the GTA a modern image. Very original was the instrumentation with an orange background (blue background on the 1987 GTAs) which was the same as that mounted on the XR enduro and complete with odometer, rev counter, coolant thermometer and a wide range of warning lights (with a blue background on the 1987 GTAs). 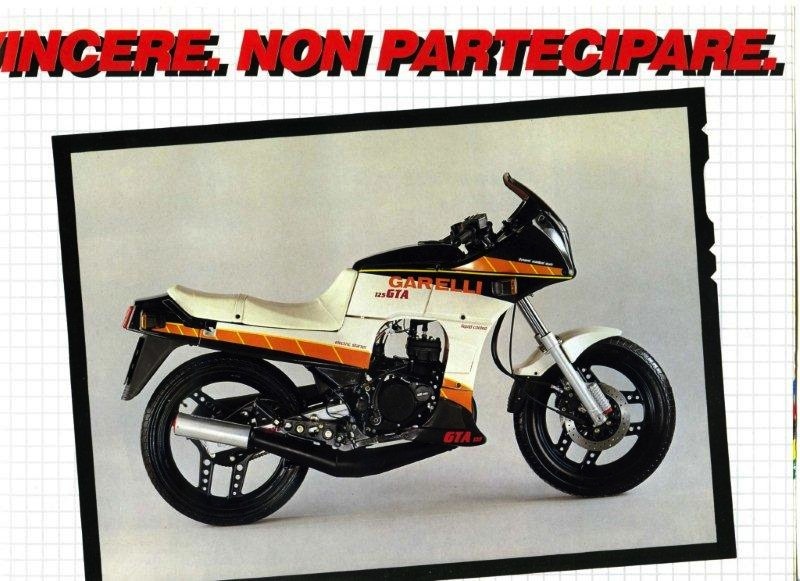 Even in the chassis, the GTA did not betray the expectations and following the fashion of the moment, the frame (identical to that of the XR enduro except for the dimensions of the headstock) had square section steel tubes while the suspension saw a Marzocchi 32mm front fork with anti-dive system, a classic in the world motorbike production in the mid-80s. At the rear, Garelli had developed its own solution called Soft Lever with a steel swingarm in square tubes operated by a linkage system with Marzocchi single shock absorber. The braking system was quite powerful and modular and at the front it was already prepared for the adoption of a second disc that would then be fitted as standard from 1986 and from 1987 combined also with a rear disc that would replace the drum. 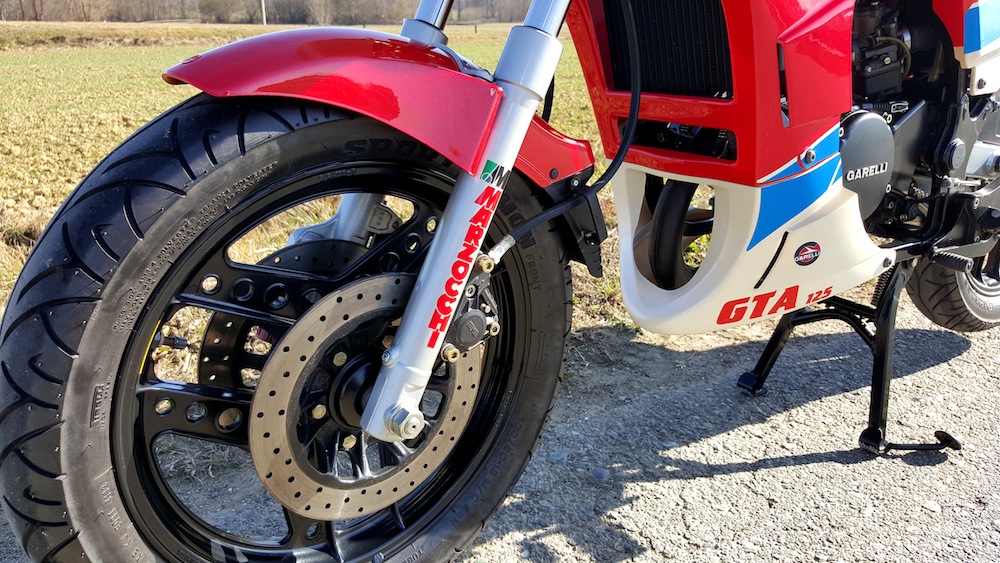 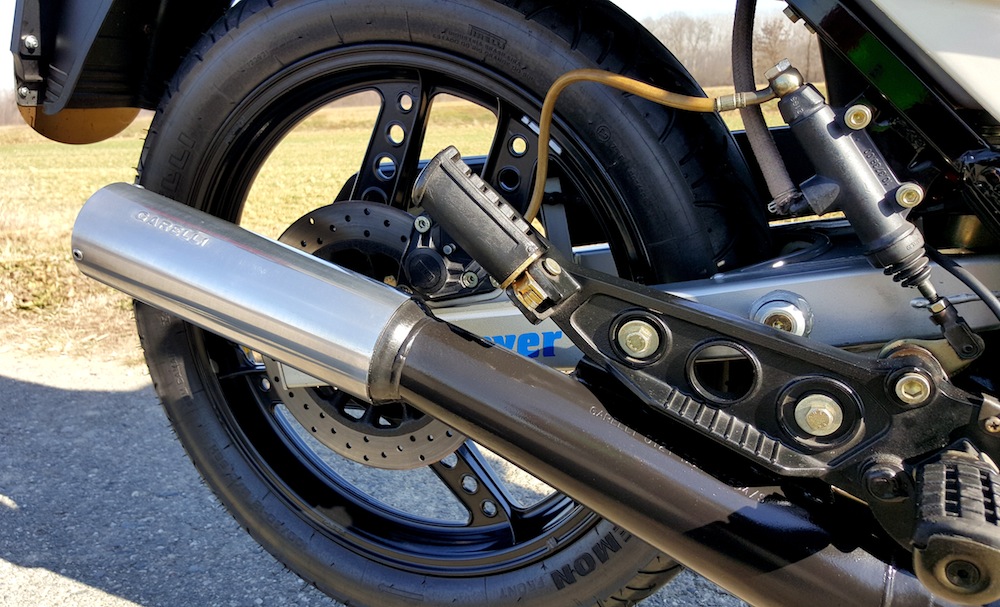 So the GTA didn't excel compared to the best competition, but it didn't disappoint either. It was a nice, well-balanced and honest 125 road bike. Two characteristics that were perhaps better appreciated by mature motorcyclists rather than by young sixteen year olds caught up in looking at the tenth of horsepower and half a kilometre of top speed difference between one model and another. On the other hand, the evolution of the market was clear: compared to the peaks reached in the early 80s with well over one hundred thousand registrations, the category of 125 (and the market in general) was about to be completely downsized, also thanks to the helmet requirement introduced in 1986. But above all, the market was specialising in more and more sophisticated and high-performance products, so it was no longer enough to produce a good 125: to sell, you clearly had to aspire to be the best and renew your products every year, even every six months! Obviously, such excesses could only mean huge investments and therefore great willpower on the part of the manufacturers who always had to aspire to excel. So it was no coincidence that from the dozens and dozens of assemblers and glorious brands that populated Italy in the 1970s, the second half of the 1980s saw the 125 market become the exclusive domain of Aprilia, Cagiva, Gilera and Honda Italia.

The boys of the 80's wanted to dream, they were not satisfied with the middle ground. From this point of view, the market data are unequivocal: the 1985 queens of the 125 class, despite the higher price compared to the Garelli, were the Aprilia AS 125 R, Cagiva Aletta Oro S1 and Honda NS 125 F, which offered top performance figures, an area where the GTA instead suffered from technical choices that were not avant-garde. Let's be clear: the Hiro two-stroke engine that powered the GTA was a good engine, but it suffered from the lack of an exhaust valve that would have allowed the adoption of a cylinder with a much more powerful distribution diagram in order to find the extra horsepower that would have made the GTA a thoroughbred, or at least one that would have brought its performance closer to the best competitors born in 1985.

With the exception of minor production updates aimed at improving reliability, the GTA's engine was in fact the same as that fitted to the Aprilia STX, presented a year earlier than the Garelli. It was a long-stroke with forced cooling, automatic mixer and six-speed gearbox with the special feature of the mixed-lamellar intake system called HIS. The setting of the Dell'Orto PHBH 28 AS carburettor (BS on the STX) and the exhaust system with stainless steel tailpipe were also not too dissimilar to what was seen on the Aprilia. However, compared to the unit mounted on the STX, the Garelli could boast the balancing countershaft and above all the electric starter which made it the only engine in its category to adopt it together with the Gilera RV 125. Two gems that unfortunately had little effect on performance. The measurements of the time indicated a maximum power at the wheel of 18.56 hp at 8,250 rpm, so a value just above the 18.48 hp recorded by the Aprilia STX and also the classic acceleration tests on 400 meters from a standstill confirmed the close relationship with the Aprilia. The top speed was 134.4 km/h, where the best competitors had already entered (or were very close to) the 140 km/h "club". It was only a handful of kilometres, but in the mind of a 16-year-old it made a huge difference. 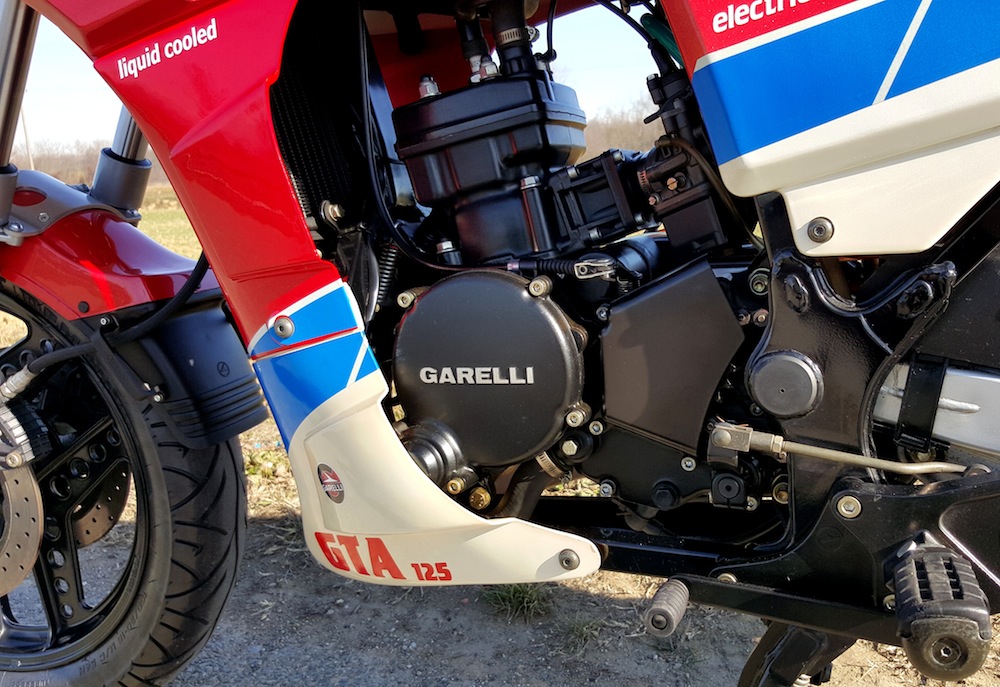 History is not made with ifs. However, allow us a couple of ifs that are a must to conclude the history of the GTA. If it had been presented a year earlier, the Garelli would have been revolutionary, like the Gilera RV, a 125 that with a dry weight of 10 kg more than the GTA had perhaps a less sporty feel. In 1985, however, the evolution taking place in the 125 class was already such that the GTA was already outdated and the slight restyling to which it was subjected was of no use when by 1986 and 1987 it was already a 125 completely out of the market. About 3000 examples were sold. It was a pity, because if the company had believed and invested in the project, the evolution of the GTA could have capitalized a lot on the world titles won with the 125 GP by Angel Nieto, Luca Cadalora and Fausto Gresini in the world championship and by Ezio Gianola, Maurizio Vitali and Luca Cadalora again in the Italian speed championship. A strategy, that of the GP replica, which they implemented with enormous success at Noale. But that's another story.