Over the years Gilera has always produced interesting little 50s, and it is hard not to remember masterpieces such as the Regolarità Competizione 50 of the 1970s. In the following decade, at least in the first part of the 1980s, Gilera concentrated mainly on 125s and twin cam single cylinders, so much so that the first modern 50 arrived on the market only in 1987, with the Rally 50 powered by Ktm. Therefore, the Arcore company was somewhat behind Aprilia and Malaguti; a delay that it tried to make up for towards the end of the 1980s by designing and building its own ex-novo engine that would equip the Top Rally 50 and its evolutions, as well as the road 503 and the Bullit 50, which is still a success among enthusiasts today. Unfortunately, the time was already ripe for the scooters that would soon take over the desires of 14-year-olds and Piaggio's plans for Gilera were very clear. Unfortunately.

The Gilera 50 engine.
Before starting to describe the Gilera 50 production of the 80s and 90s, it is important to dwell on the heart of the 50cc motorbikes produced by the Arcore-based company. 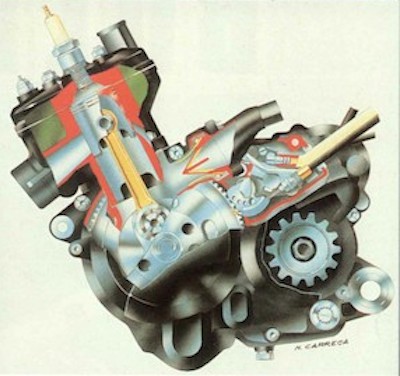 The Gilera 50cc engine was entirely designed and produced in Gilera until the closure of the historic Arcore factory. It was a power unit designed at the exact moment when the Highway Code regulations changed, leaving manufacturers free power for their 50cc engines (previously limited to 1.5 hp), but introducing the absurd limitation of the maximum number of 3 gear ratios. The engine was born with 4 gears and could have an automatic mixer or not and an electric or pedal starter. Gilera had therefore designed an engine without any particular constraints that was capable of delivering the remarkable power of 6.5hp (obviously without throttles) with the small 12mm "code" carburettor. Certainly, in 1989 it was a much better performing engine than the more popular Cagiva, Morini and Minarelli, but its Achilles heel was immediately apparent: vibrations. Leaving the floor to Ing. Romolo Ciancamerla (designer at the time of Gilera and also involved in the development of the Bullit): "Due to cost issues, the countershaft with which it was initially intended to be equipped, remained in the designer's pen and therefore it was decided to make a rather strange solution: the engine was equipped with only two attachments to the frame, one front and one rear and the constraint to the front cradles of the frame was thought not to be rigid, but through a sort of short connecting rod that, in the ideas of those who had thought of it, should have filtered the vibrations. It was a solution used on scooters, but it didn't lead to any improvement: the chassis, whatever vehicle it was, all cracked on the connection of that connecting rod to the down tubes and the engine still vibrated like a whip, to the point that the plastics of vehicles equipped with that engine regularly shattered! No solution was ever found other than to weld the chassis where it cracked.

The Gilera 50 engine was born with 4 gears and consisted of a primary shaft with 11-15-20-24 and a secondary shaft with 40-35-32-28. The 4-speed gear mounted on the secondary shaft was present and only needed to be unlocked (by opening the crankcase to remove the lock on the desmodromic) to be used. This modification was absolutely necessary, as without the retainers, the 6.5hp engine had a very short third gear!

During production, the 4-speed gear on the secondary gearbox was eliminated and the entire gear ratio was revised, lengthening all the gears. Therefore, in order to change to 4 gears, the engine had to be opened in two (therefore a more complicated operation compared to the previous gearbox) and the 4-speed gear on the secondary had to be physically added, so much so that Gilera had prepared a special kit for the conversion. The modification therefore resulted in a 4-speed gearbox with a 12-23-25-18 primary gear (in order of assembly) with a corresponding 38-29-26-34 secondary gear (again in order of assembly on the shaft). So there are two totally different gearboxes! (Thanks to Meteolaipacco's blog). 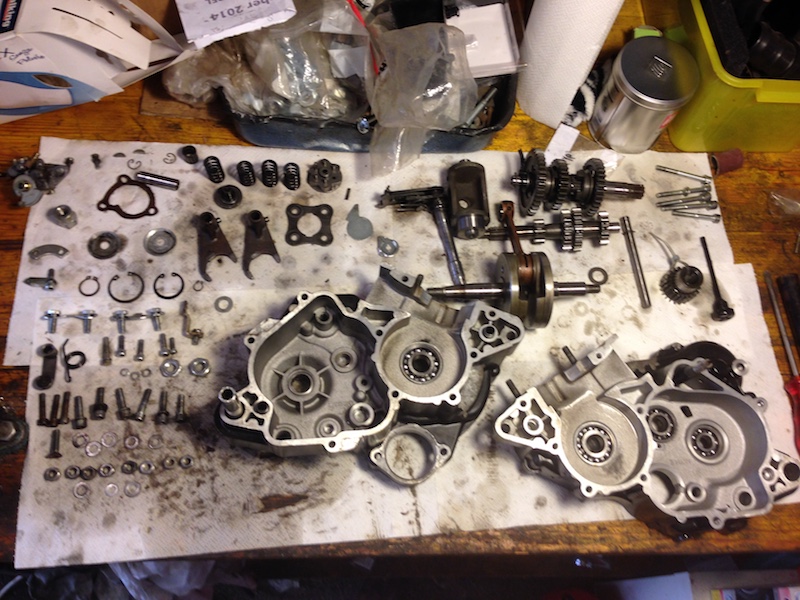 However, it was a rather absurd gearbox, the result of compromise choices imposed by the Code. As always with the 50 engines of those years, the best solution would have been to change the gearbox to 6 gears. This was possible by replacing all the components: primary shaft, secondary shaft, desmodromic and selector shaft.

We conclude with the words of engineer Romolo Ciancamerla, mentioning that: " At the closure of the Arcore plant at the end of 1993, someone decided that only the 50ino had to be saved and, since the quantities were too small to transfer the construction of the engine to the mega plant in Pontedera... the equipment was transferred to Franco Morini, who continued to produce the engine under the Gilera brand; an engine that was used both for Spanish vehicles and for the only ex-Arcore vehicle that was decided to continue to be produced in Spain: the custom Eaglet, then equipped with 6 gears.
Well, that engine was produced by Franco Morini, for Gilera/Piaggio at least until 1997 and was also mounted, with 6-speed gearbox, on the 1999 Gilera GSM 50 motard."

Rally 50 - 1987
The Rally 50 was the first modern 50cc motorbike produced by Gilera and although it was a completely new model, it was already very well equipped. The very complete instrumentation, the good quality of the fairings and a fashionable chassis - although there was no rear disc brake - were offered at a price of 2,850,000 lire. The Ktm engine was very interesting, liquid-cooled with forced circulation, equipped with reed valve, automatic mixer and 4-speed gearbox as required by law. It was a very good engine, which vibrated very little and was derived from the 80cc motocross version; it was just a pity that there was no electric starter, by now an essential accessory also for the 50. Two colours were available: white, black and red and white, black and blue. 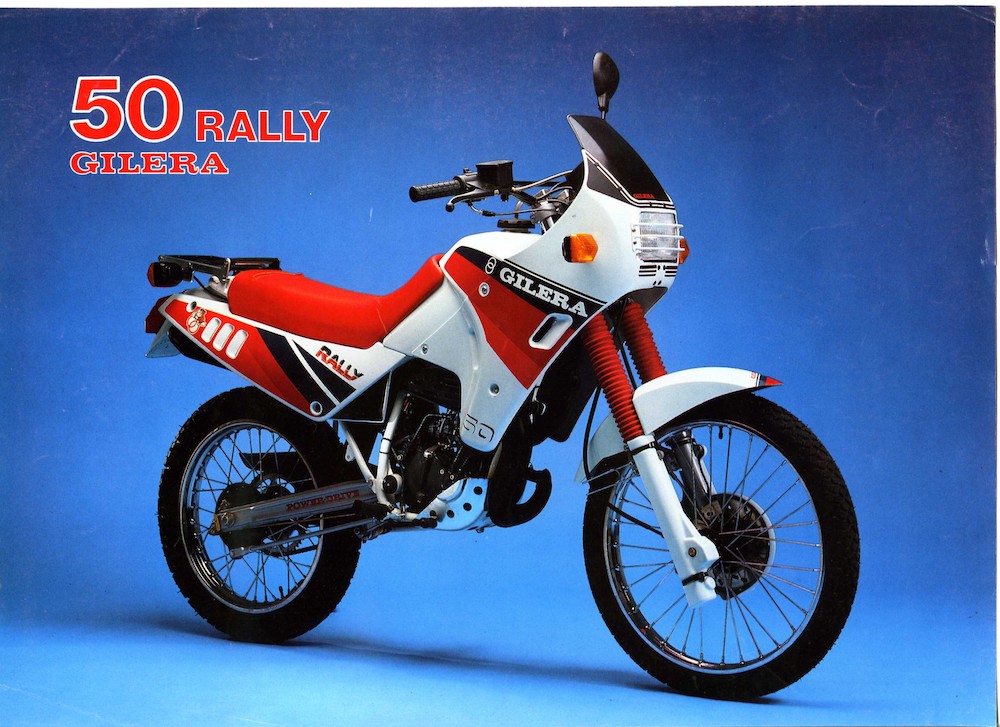 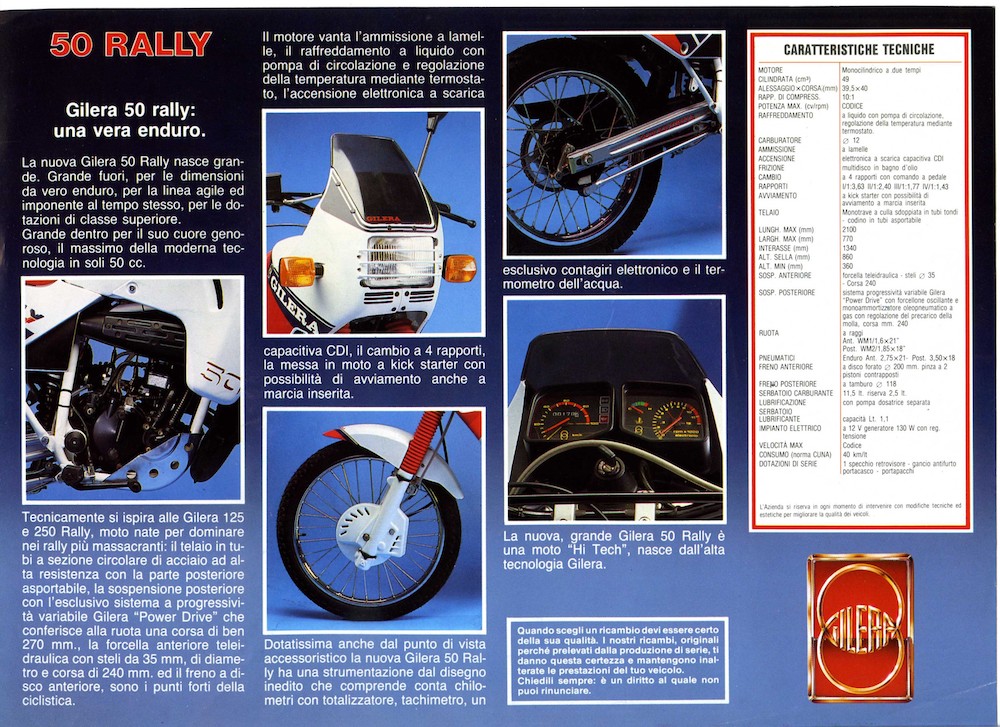 R1 50 - 1988
The R1 50 was offered for sale at Lire 3,050.00 in two colours: black-red and white-red. The base remained the same as that of the Rally 50 of the previous year and therefore also the Ktm engine remained unchanged. 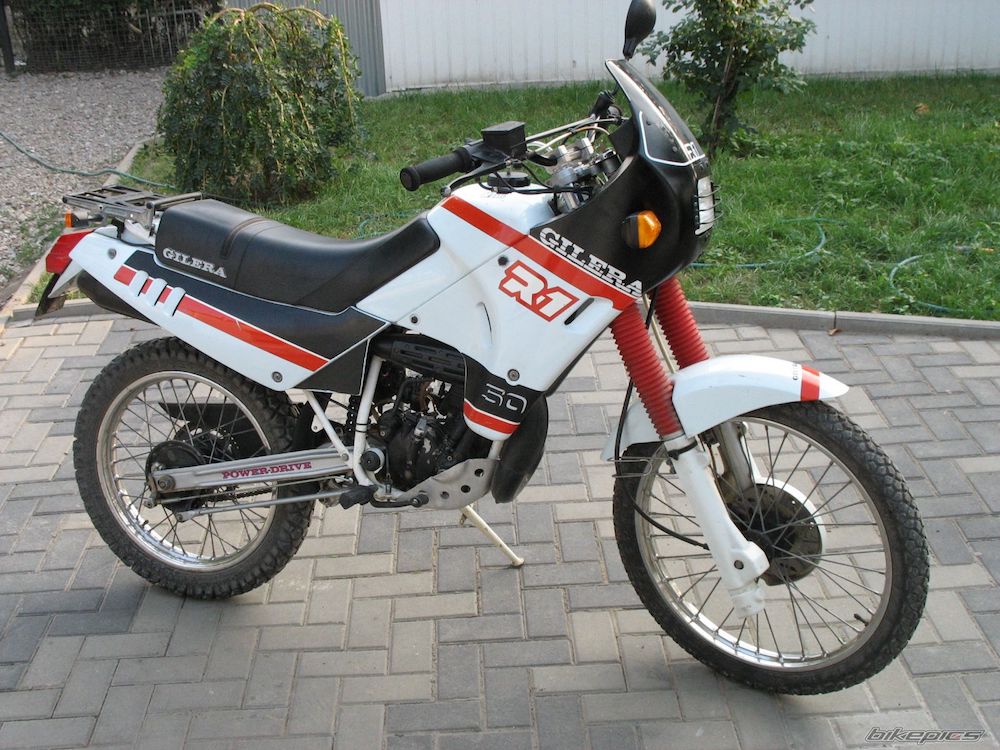 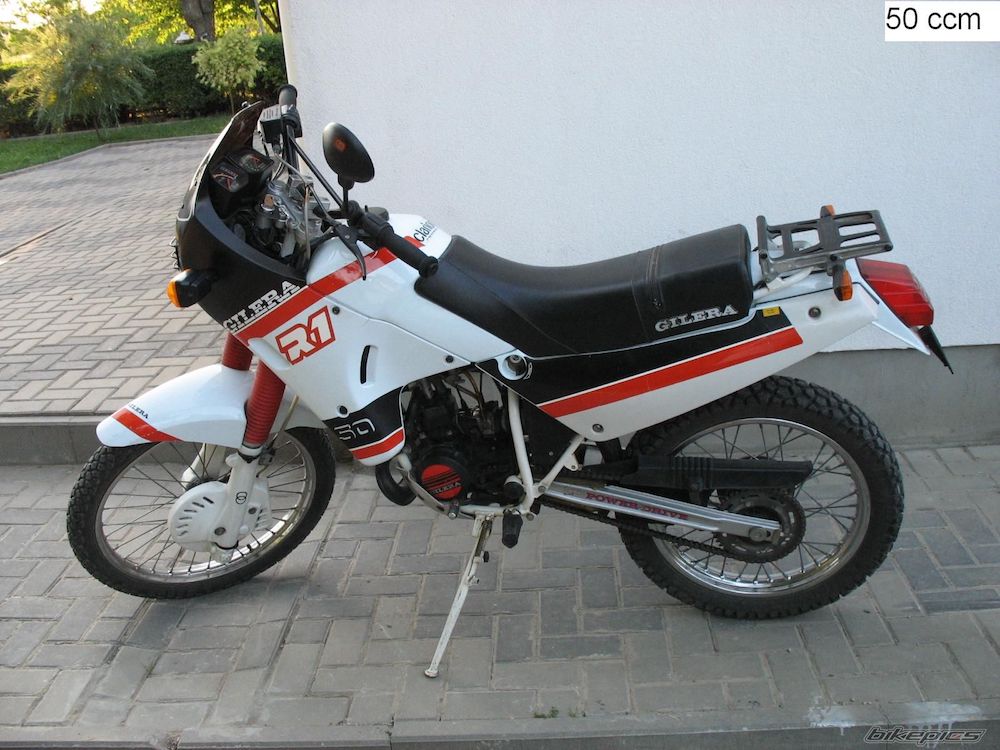 RC 50 Top Rally - 1989
The RC 50 Top Rally introduced important novelties for 50cc motorbikes produced by Gilera and specifically a brand new engine entirely designed and built in Gilera that took advantage of the new law that abolished the power limit for 50cc engines (previously fixed at 1.5 hp, but now accompanied by the reduction of the maximum number of 3 gear ratios) and could boast an impressive 6.5 hp. Cooling was still by forced circulation, but now the reed valve was directly in the crankcase and, in addition to the automatic mixer, an electric starter was finally available. The chassis was largely based on the previous Rally 125, although the suspension settings had been revised and a 230mm rear disc finally made its appearance. The superstructure was new and the complete instrumentation was new. Red or black were the available colours. 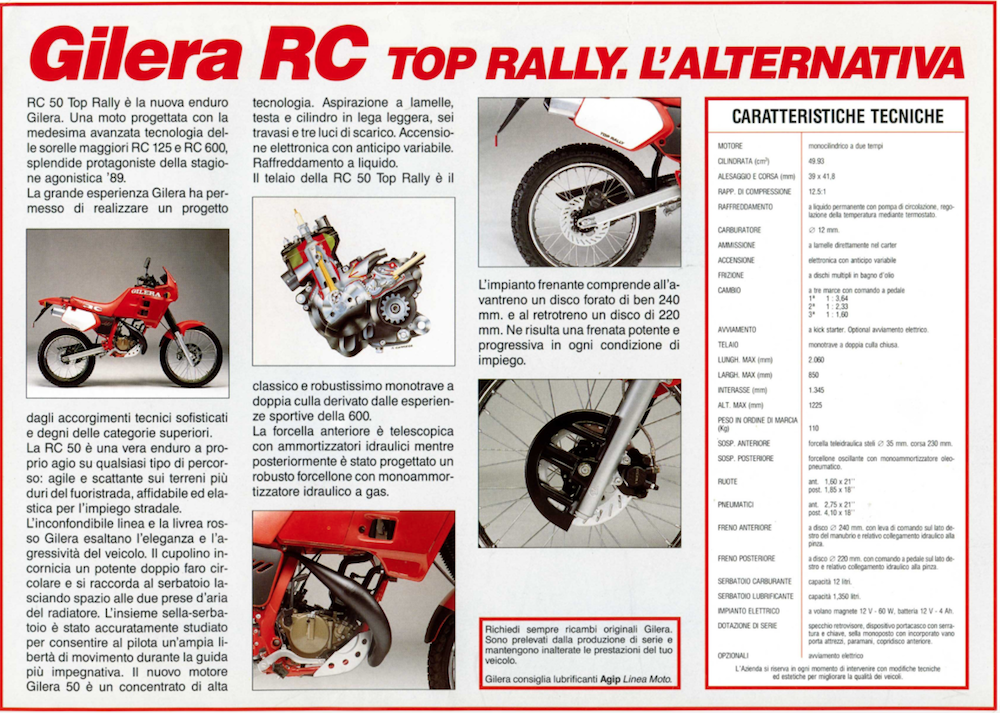 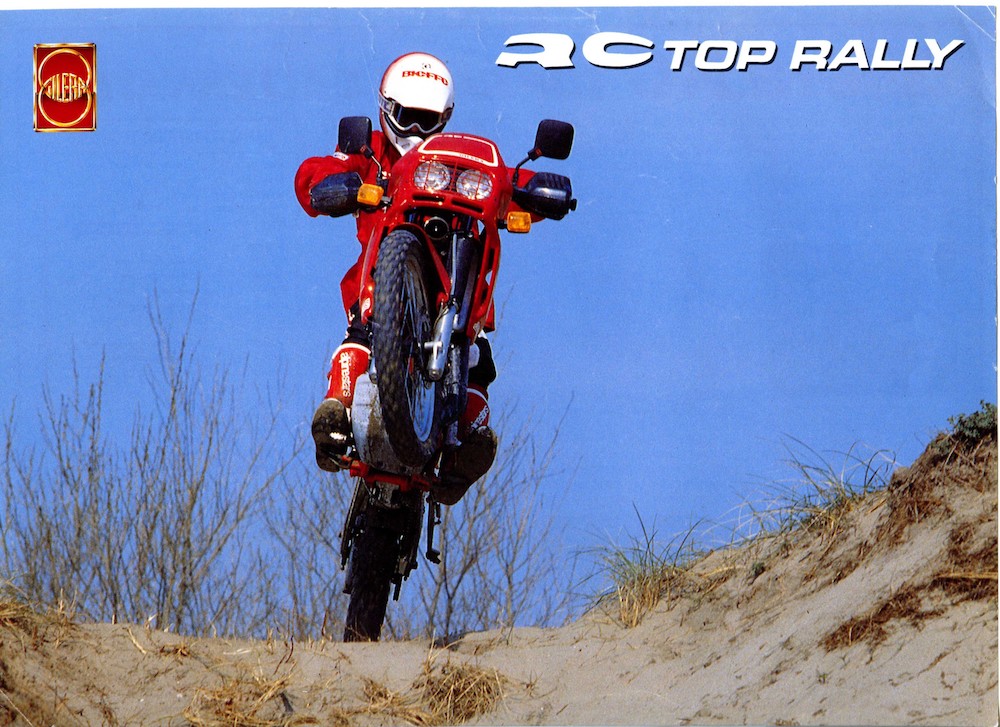 Sioux 50 - 1990
Inspired by the Apache 125, the Sioux took the place of the previous RC 50 Top Rally. Sold at a price of Lire 3,900,000, the Sioux differed from the RC only in the setting of the fork, still 35mm, with revised hydraulics and the single rear shock absorber. Everything else was the same, including the Gilera engine with 3-speed gearbox. Two colours were available: blue with yellow saddle or white with green saddle. 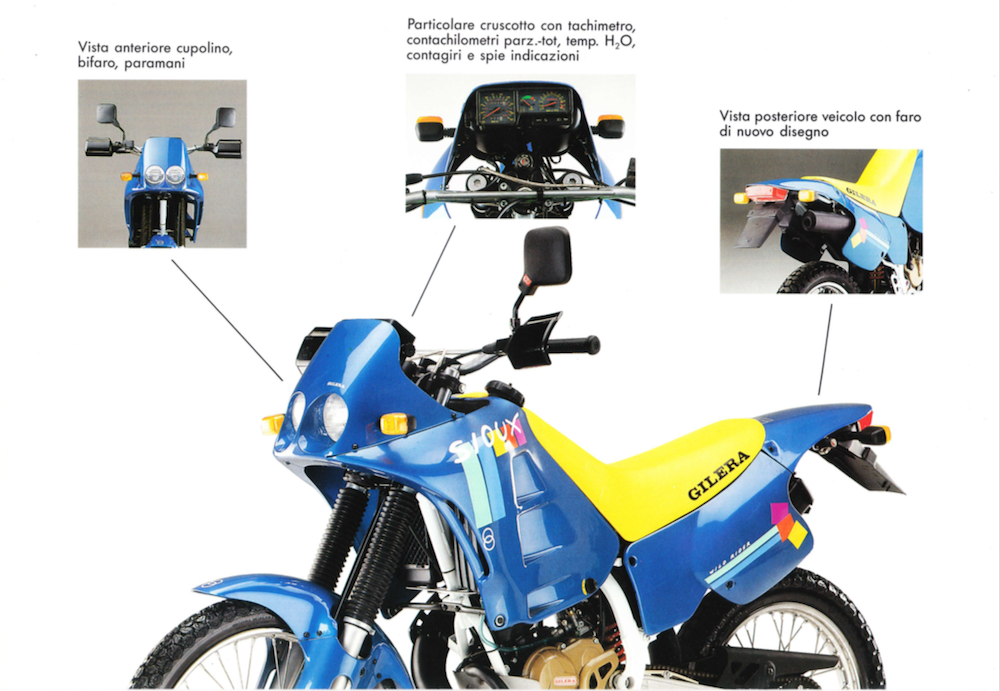 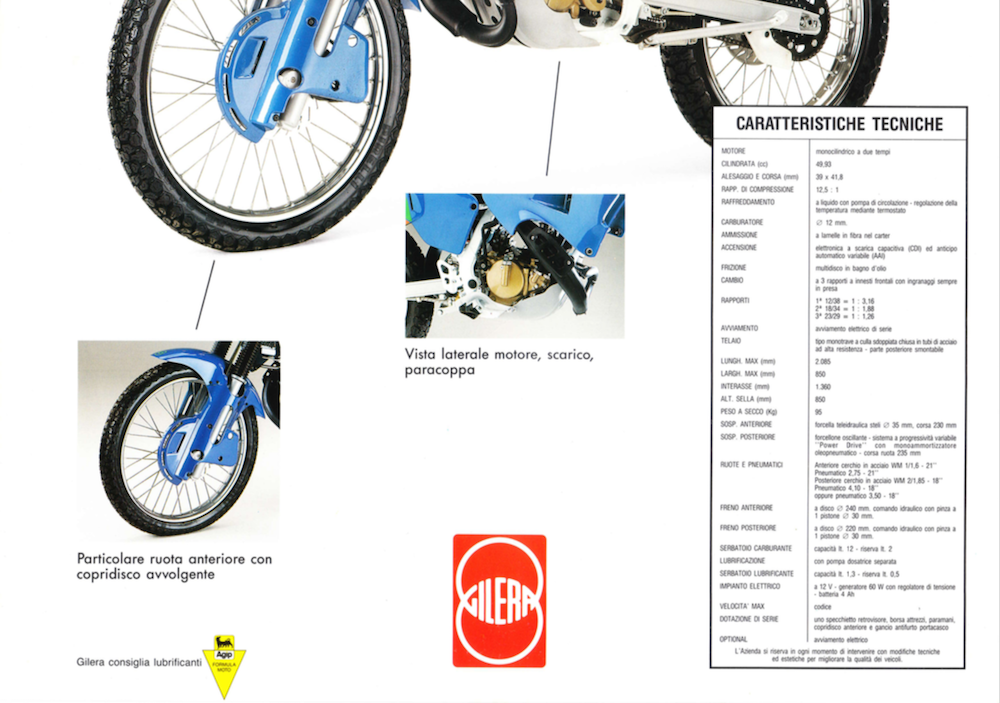 Bullit 50 - 1990
Offered at a price of 2,500,000 lire (150,000 lire with electric starter), the Bullit represented a decisive innovation in the world of 50s. It was difficult to position it as a tubon, but also as a motorbike; let's just say that the Bullit opened up a new vein in which it was the only participant. The frame was still 'open' like the tubonis, but the similarities stopped there. The structure used was in fact a diagonal boxed steel twin girder, coupled to a single-sided swingarm with a cantilever wheel. The suspension system featured a 30mm fork and a single gas suspension. There was a 240mm disc brake at the front and a classic drum brake at the rear, combined with an unusual transmission sprocket that was slightly boned inwards. The engine remained the familiar Gilera with reed valve in the crankcase, automatic mixer and electric start (optional) introduced on the 1989 RC Top Rally and still equipped with 3 gears. The colours available in 1990 were: white-red-blue, black-red-white and light blue-water green. The Bullit remained in production until 1993 and was offered in multiple colours. 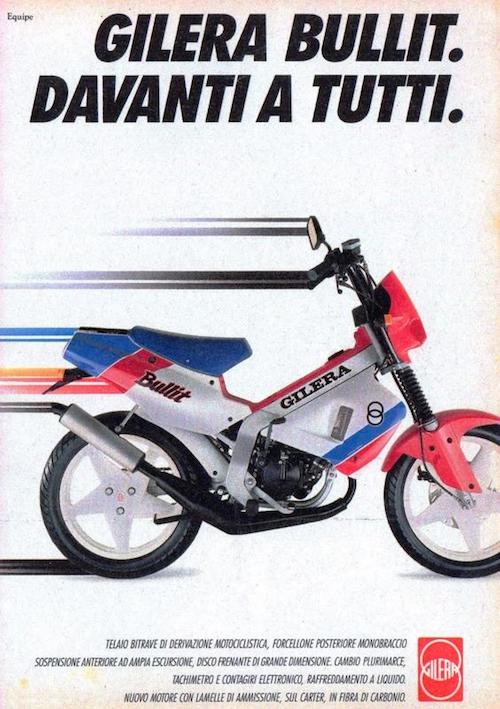 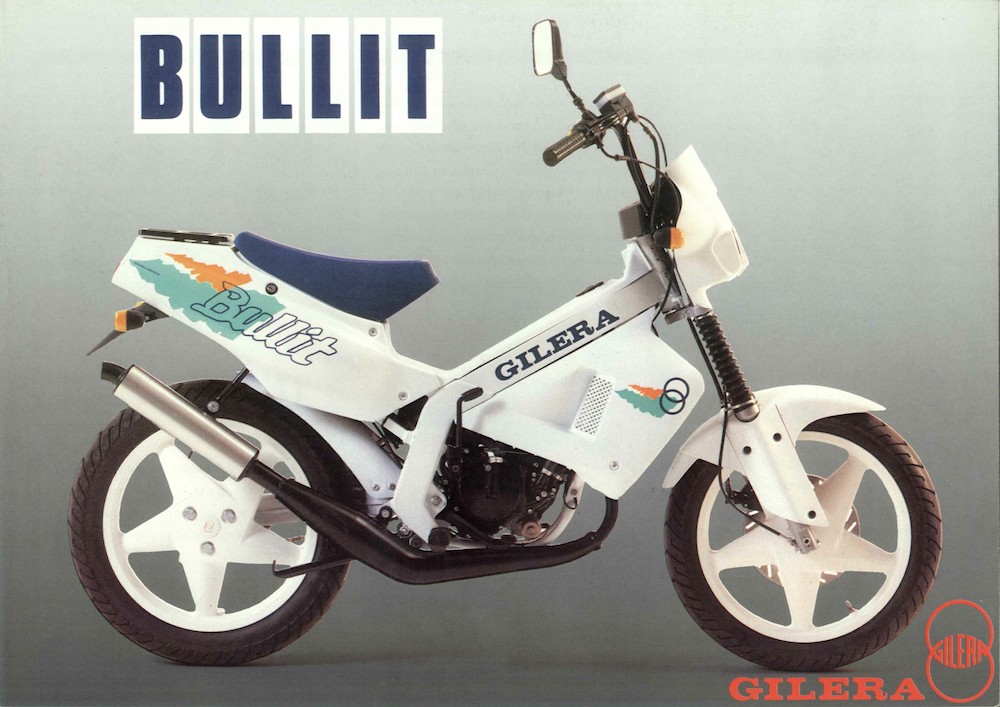 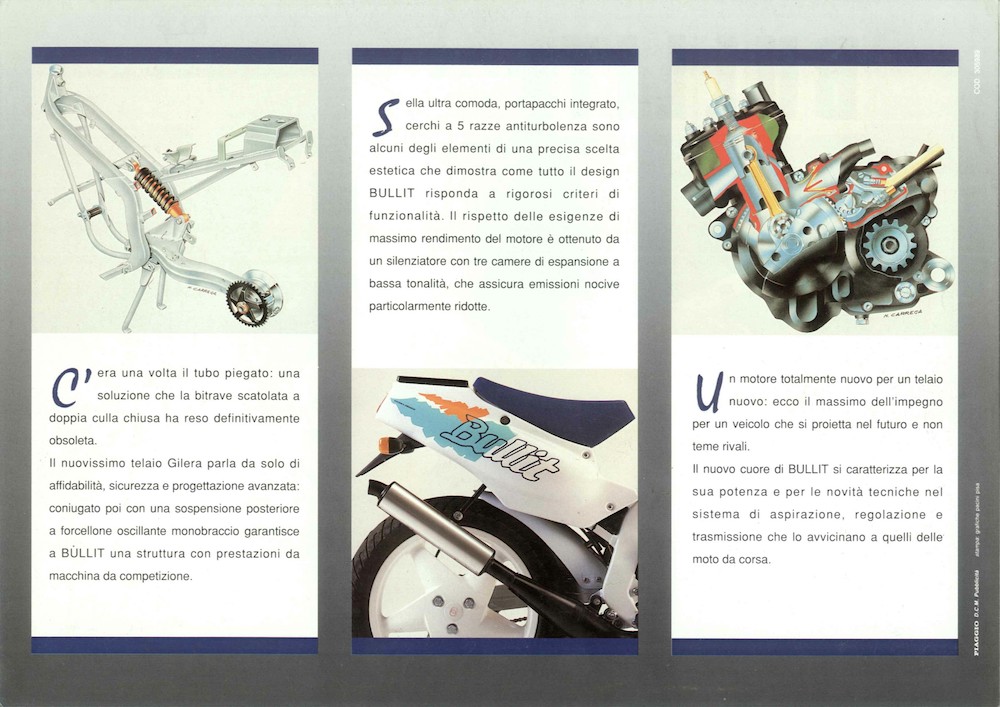 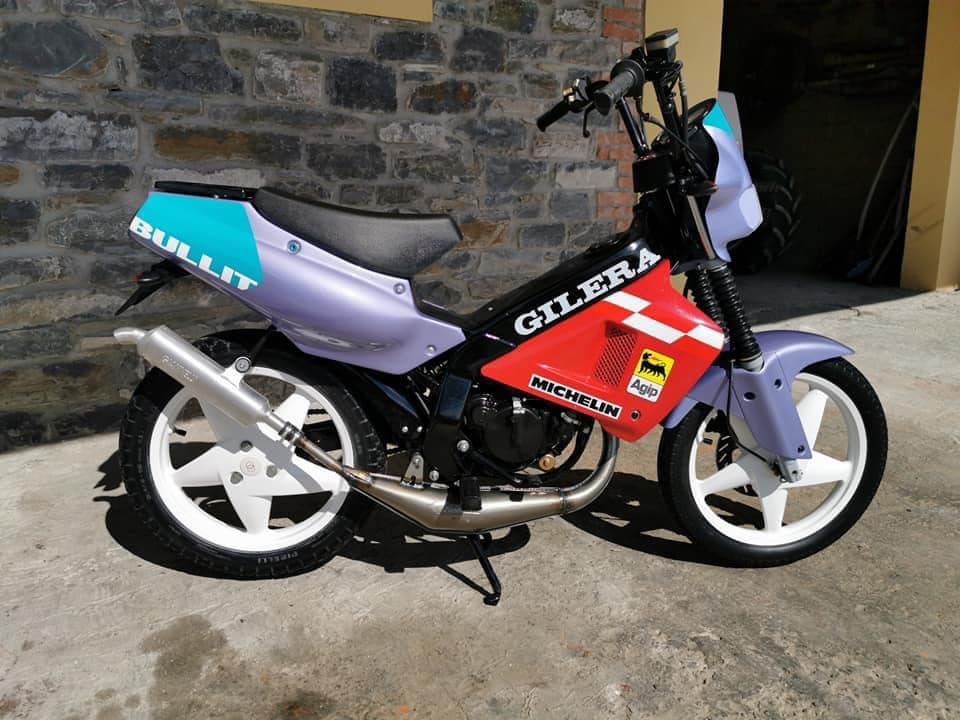 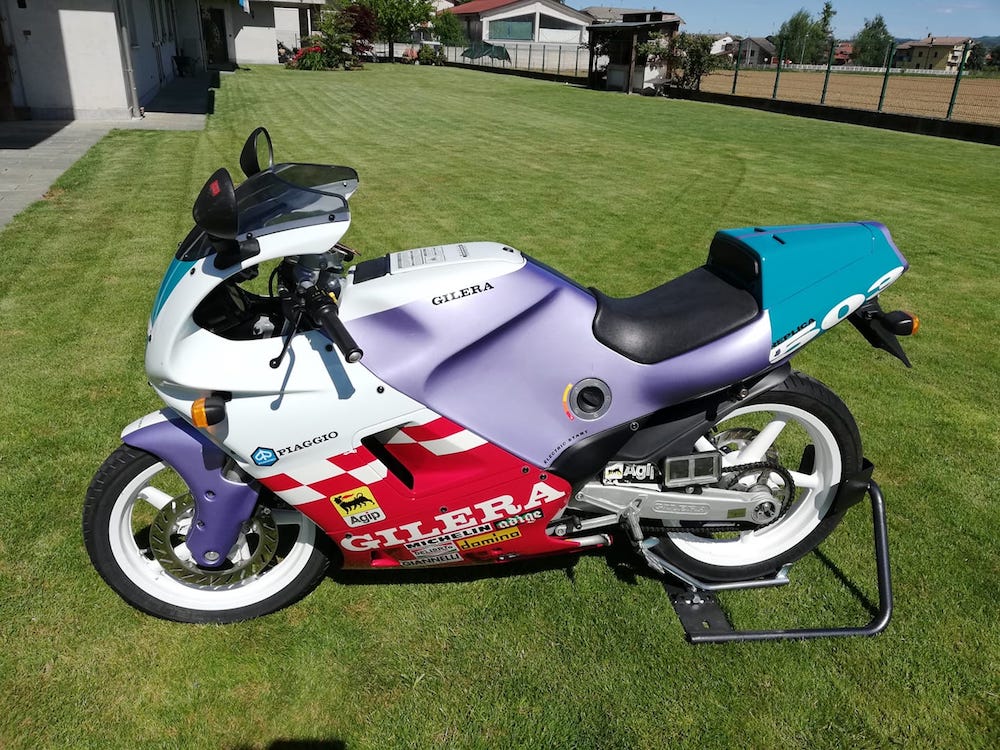