HRD, or Happy Red Devils. HRD Motor Srl was established in 1980 in Busto Arsizio, Varese - then moved in 1984 to San Vittore Olona, Milan - and thanks to the technical genius of Luciano Marabese, it immediately distinguished itself in the production of small motocross bikes (HRD P3 and P6) that looked like small Bimota, because of the trellis frames with the swingarm coaxially connected to the sprocket, in order to keep the chain tension constant. Then began the adventure of designing and building the beautiful 125 stradali Red Horse, Silver Horse and White Horse, with trellis frame and Tau engine type TVR 30 Mixer, which although remained in production for only two seasons, thanks to the exclusivity (at a high price) and performance worthy of note, became a cult object of all 16 year olds of 84/85. We have tried to reconstruct the evolution of the models produced, but given the small production numbers and the craftsmanship of the product, it is very complicated to try to reconstruct the differences between the various versions, which were built with the components available at the time of their passage through the assembly line. Therefore, bear in mind that although we have identified three different series, it is not certain that all the motorbikes produced adhered to the characteristics identified here. 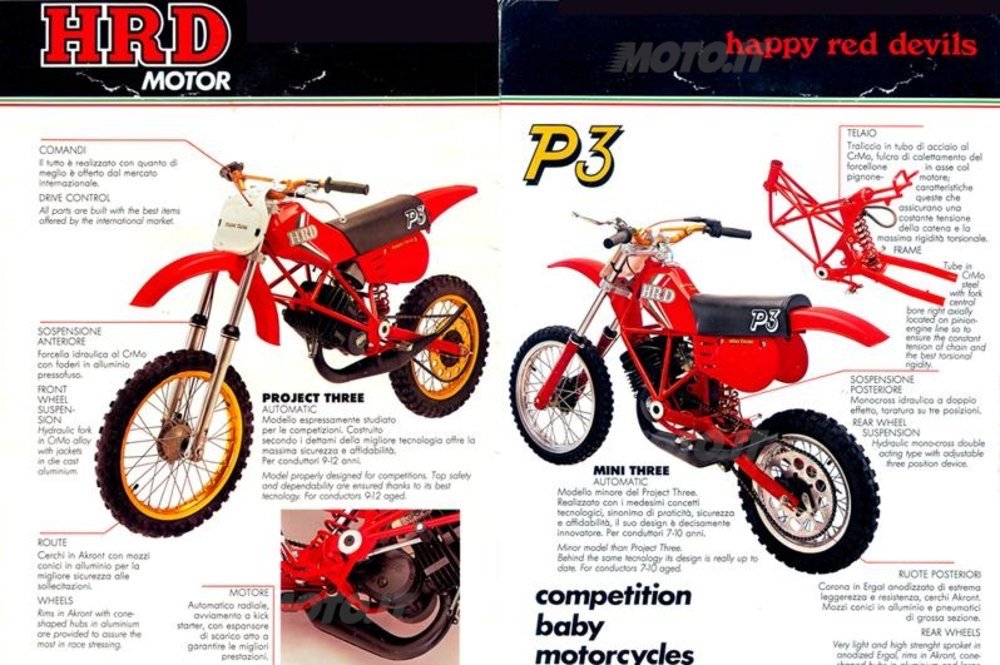 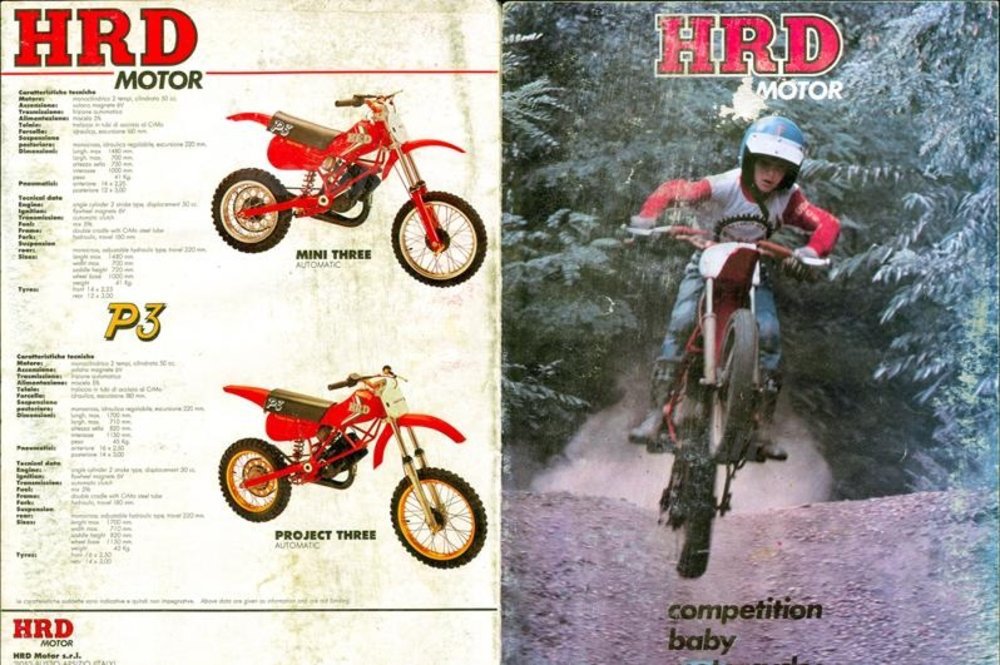 The "Horse" model was presented at the 1983 Milan Motor Show and was essentially a single model, marketed in three different colour versions, each with a specific name to identify the colour of the fairing. The Horse is flanked by the Road version, which differs from the other models in that it has a more touring look and no fairing. The price was 4,128,466 lire, rising to over 5 million lire for the Silver Horse. This was the most expensive 125 road bike on the market in those years! 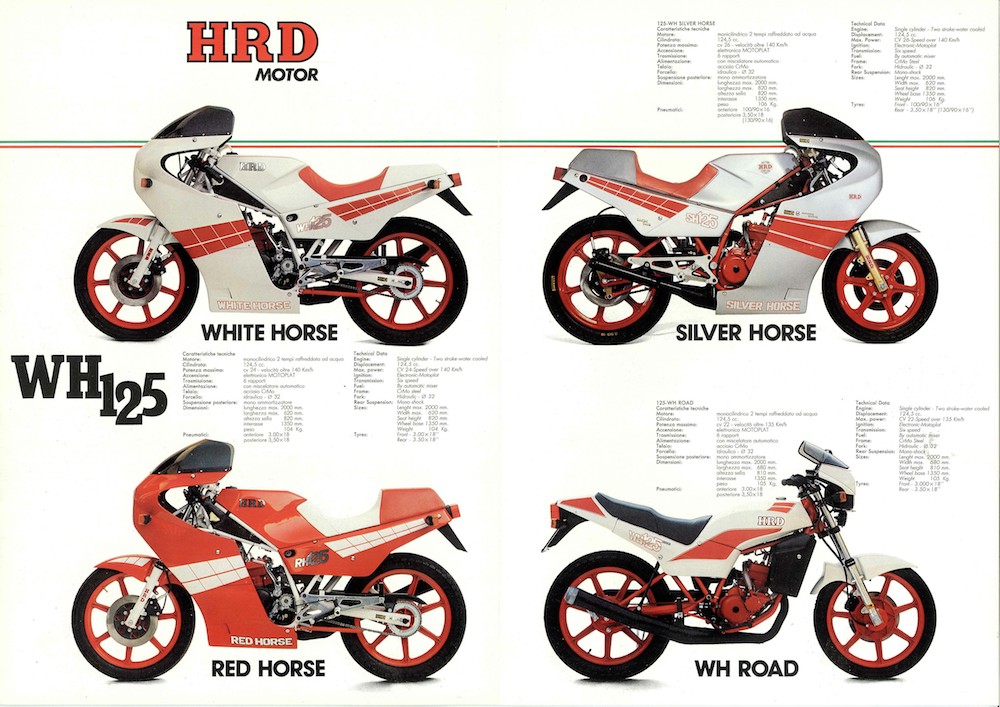 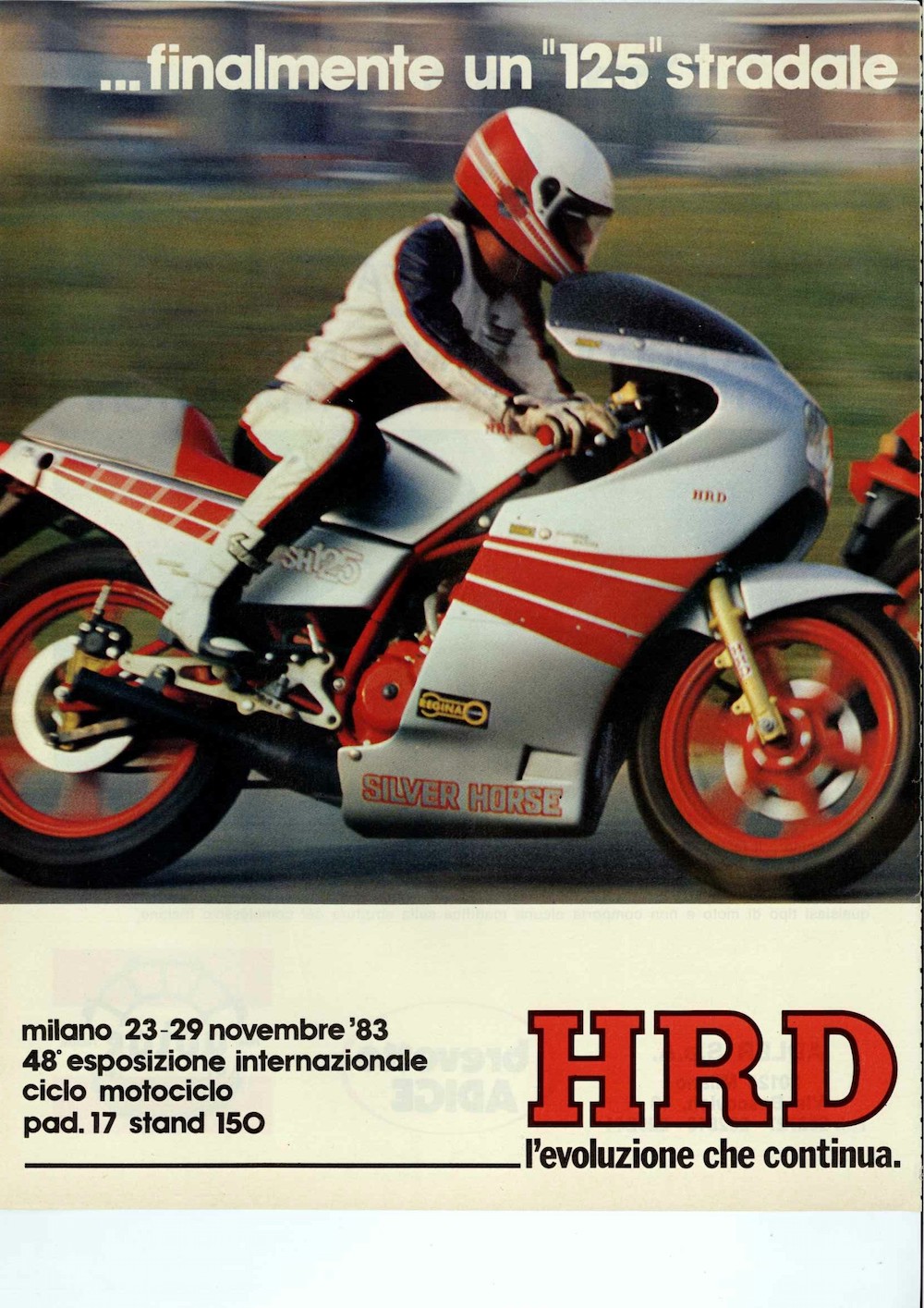 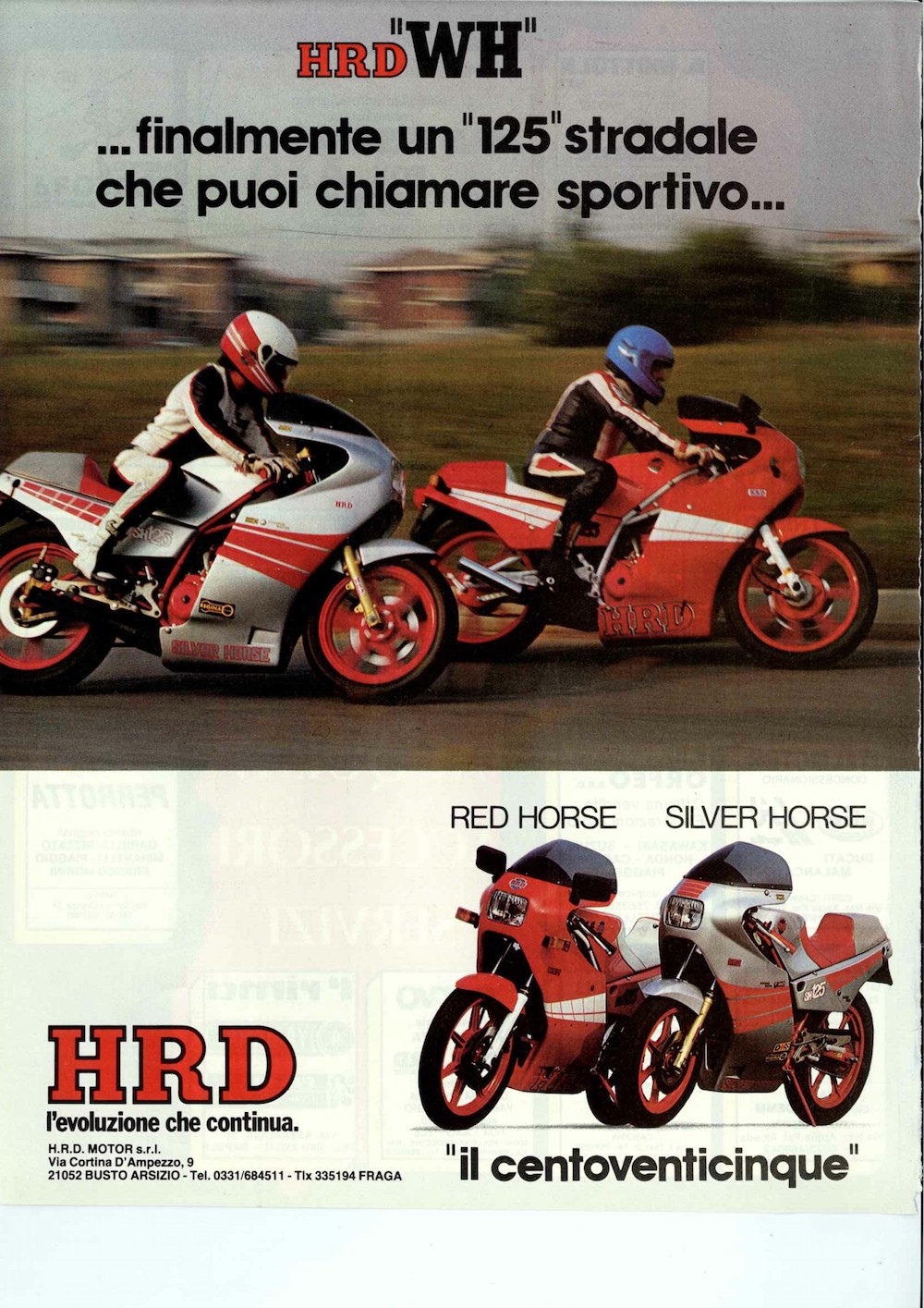 The left side has a small opening to reach the petrol tap. On the left side, hidden by the fairing, there is also the battery, hooked to the frame by means of a rubber band that dampens the vibrations transmitted by the engine. Just above the battery, you can see the filler neck for the engine coolant. The tail can be opened to provide access to a convenient storage compartment.

The real tank is made of plastic material and is concealed by the fairing. It is characterised by the presence of two caps produced by Acerbis, the right one for the fuel and the left one for the oil.

The rider's and passenger's footpegs are connected to the frame by means of beautifully crafted aluminium plates, with the right one also housing the silent-block anchorage of the exhaust system. Very nice foot controls. The bikes are only equipped with a side crutch.

The dashboard, elastically mounted, is well protected by the wraparound plexiglass fairing. The tachometer (electronic) and speedometer are from Veglia Borletti and are easy to read against the sporty white background. In the centre is the coolant thermometer, flanked by indicators. At the bottom centre is the contact key and above that the neutral and position lights. The electrical controls on the handlebars are CEV. 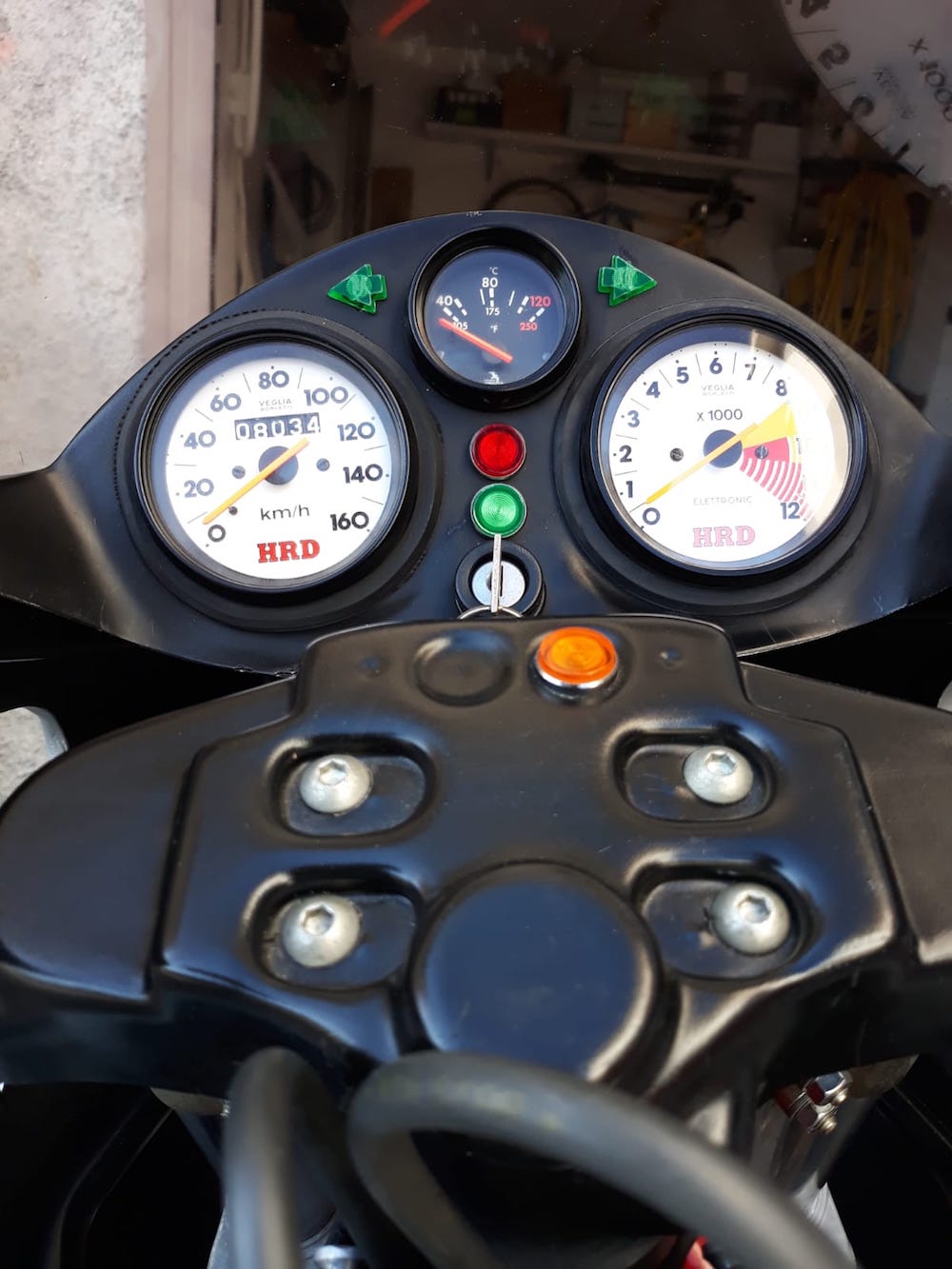 The frame (painted white for the Red Horse/White Horse and red for the Silver Horse) is a double-cradle truss in chrome-molybdenum steel, with a 27° head tube angle and 102mm trail. The non-adjustable 32mm Marzocchi fork has white painted stanchions for the RH/WH and gold painted stanchions for the SH. The chrome-molybdenum oval tube swingarm has a Bitubo single shock rear suspension. 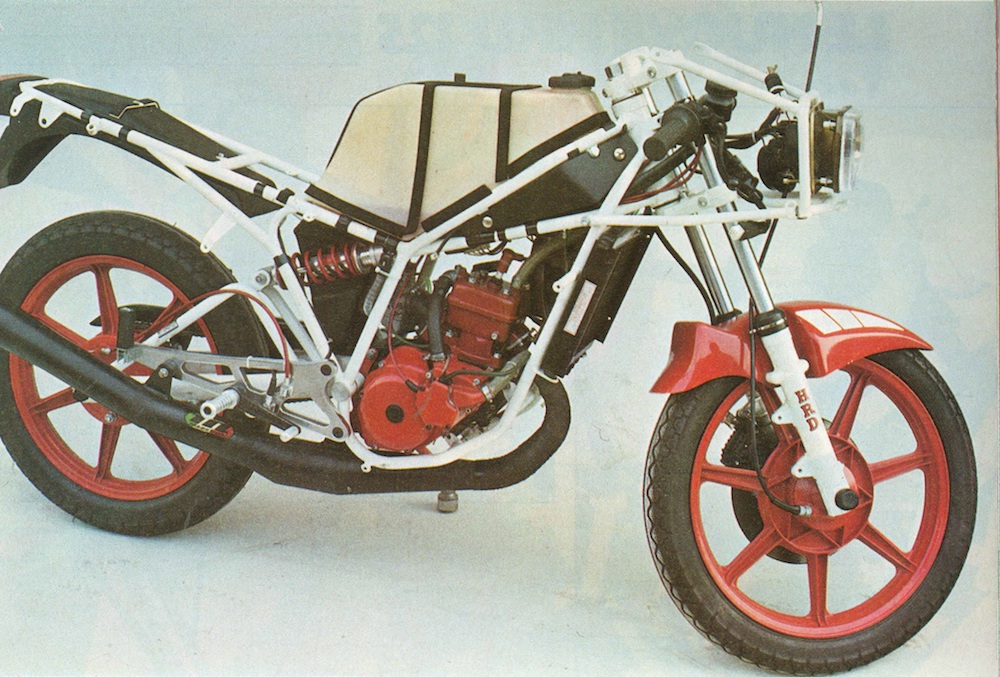 The front braking system featured a Brembo 260mm single disc, served by a twin-piston caliper, and at the rear, a more classic 160mm drum (Brembo 260mm disc for the Silver Horse). The wheels are both 18-inch seven-spoke alloys made by Grimeca, although 16-inch wheels could also be fitted (sometimes only at the front and sometimes at the rear), depending on what was available in production! (and often without homologation, so that they didn't appear on the registration book!)

The TAU TVR 30 Mixer engine is a liquid-cooled, two-stroke single-cylinder with reed valve in the cylinder and six gears. It should be noted that from the outset, all HRDs adopt the automatic mixer. The carburettor is a Dell'Orto PHBH 28 BS and the exhaust pipe in the first series is black with an aluminium end cap. In the first series, the right crankcase and cylinder are completely painted red. Produced by the company Tau of Eng. Aroldo Trivelli, the engine has a strong derivation from motocross that characterizes it for a considerable power with 22.27 hp detected at 10250 rpm for the SH and 21.99 hp at 9250 rpm for the RH and WH. These are remarkable figures that in 1984 made the Horse the most powerful single cylinder 125 road bike on the market. The problem with the Tau engine is mainly vibration: the starting point was a motocross crankshaft which did not vibrate and had a quick response, but not much extension which made it unsuitable for motorbikes stradali. So the Tau engineers weighed it down and re-balanced it with a different percentage formula, which created more vibrations. A countershaft was considered to dampen the vibrations, but the crankcase would have to be redesigned to install it, so a less efficient silentblock was chosen to be mounted on the front frame mount. 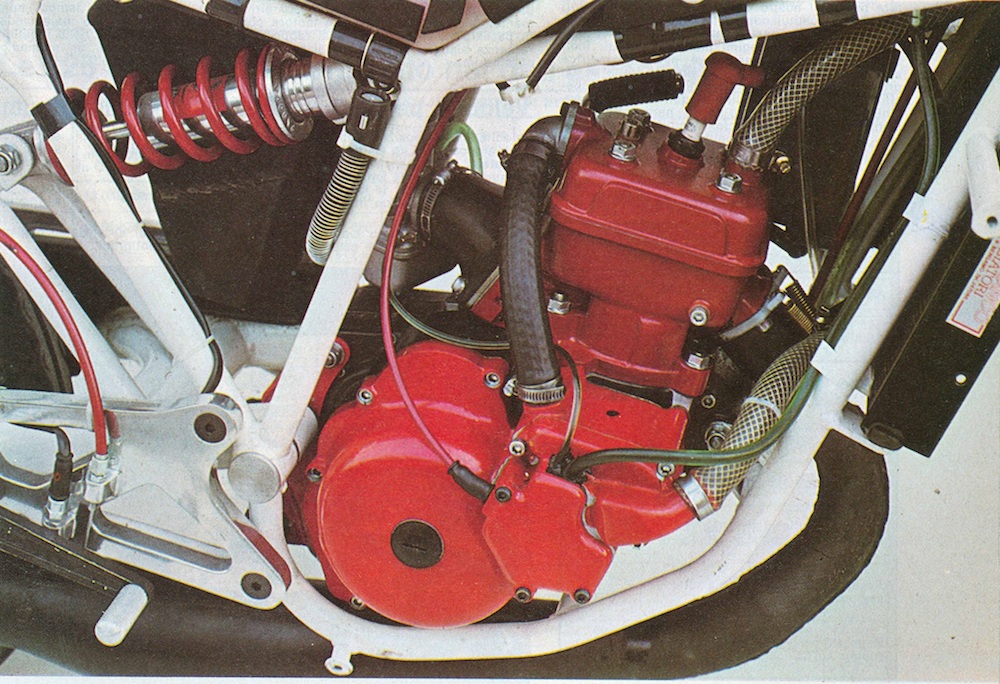 During 1985 practically only the Silver Horse remains in production. The frame is still painted red, but now the fork stays are too. On the right side, there is now a box with a hinged lid, which serves as a tool compartment. EMP's 16-spoke six-spoke wheels in size 100/90-16 at the front and 120/90-16 or 130/90-16 at the rear are generally used on the Silver, although due to production issues, they may not have been fitted. In any case, as already written above, there are several HRDs that left the factory with 16-spoke wheels without the corresponding homologation on the vehicle registration!

The Tau engine, also the TVR 30 Mixer, is now completely painted black and has a new central dome head instead of a jockey cap to give it more power. The piston now has two piston rings and in general there is an effort to improve the cylinders and the care in the assembly of each engine component, although in such a handcrafted production it is impossible to guarantee the same quality control for every engine assembled. Therefore, each engine could be better (or worse) than the next on the assembly line, being characterised by more or less power and more or less vibration. The exhaust is characterised by an aluminium end piece. 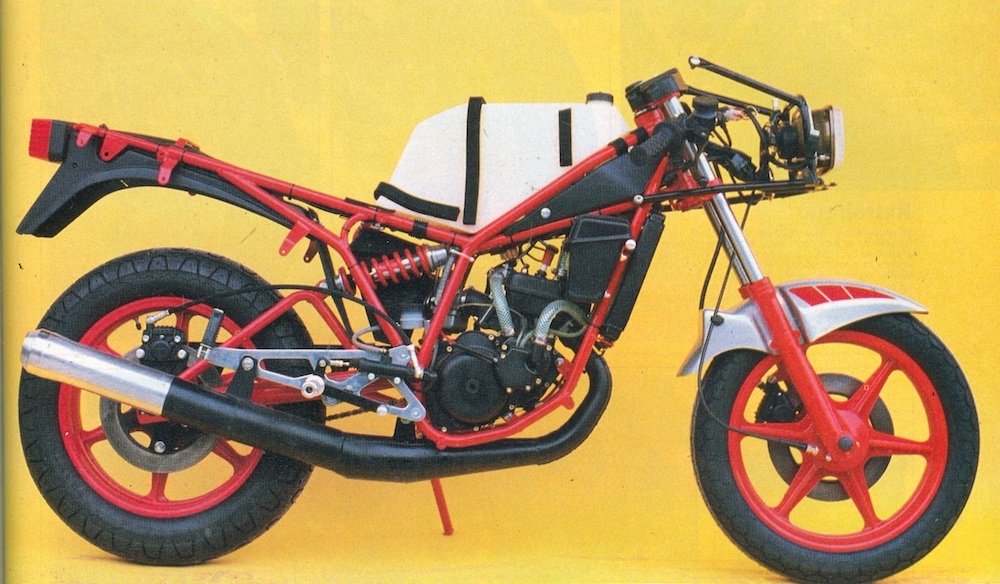 Also in 1985 a third series was released (apparently only for the Silver Horse) that adopted the adjustable Italia forks, the 260mm double front disc and a new update of the Tau TVR 30 Mixer engine (always painted black) where the water passage was modified by removing the ugly external pipe and making it pass inside the crankcase and inside the cylinder near the transfers. A modification was also made to the gear selector to improve engagement and downshifting. The seat loses its characteristic "panettone" on the passenger seat and is therefore fixed to the bodywork. Thus, the only available storage space remains on the right side behind the fairing. Note that the SH (Silver Horse) 125 lettering is replaced by the WH 125 lettering, which is also used on the Road. 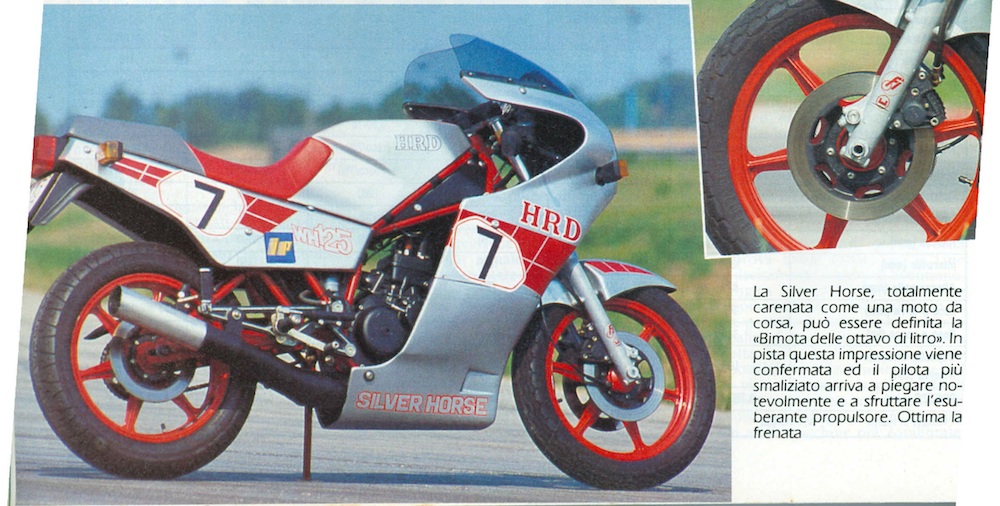 The Formula was supposed to be the racing version of the Silver Horse, but it turns out it was never offered for sale. 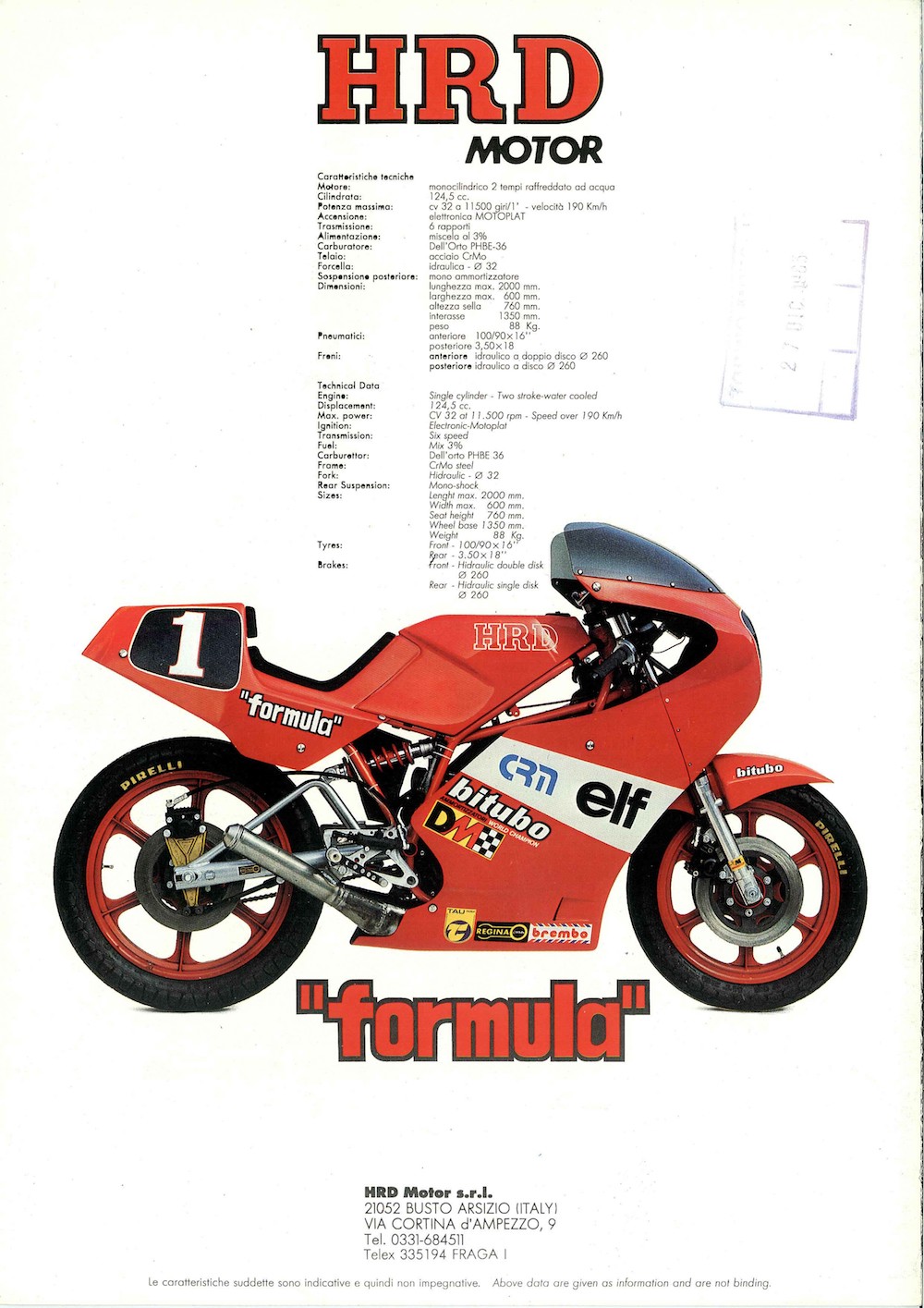 The Road was presented in 1983 together with the other Horses, but in fact was marketed in 1985 in the London smoke grey livery. As for the chassis, the Road was still fitted with seven 18-spoke wheels, while the frame (painted black like the fork stanchions), suspension and brakes remained unchanged. The engine is also completely unchanged, including the gear ratios.

The Road is therefore characterised by a more touring style of riding with specific handlebars and footpegs. 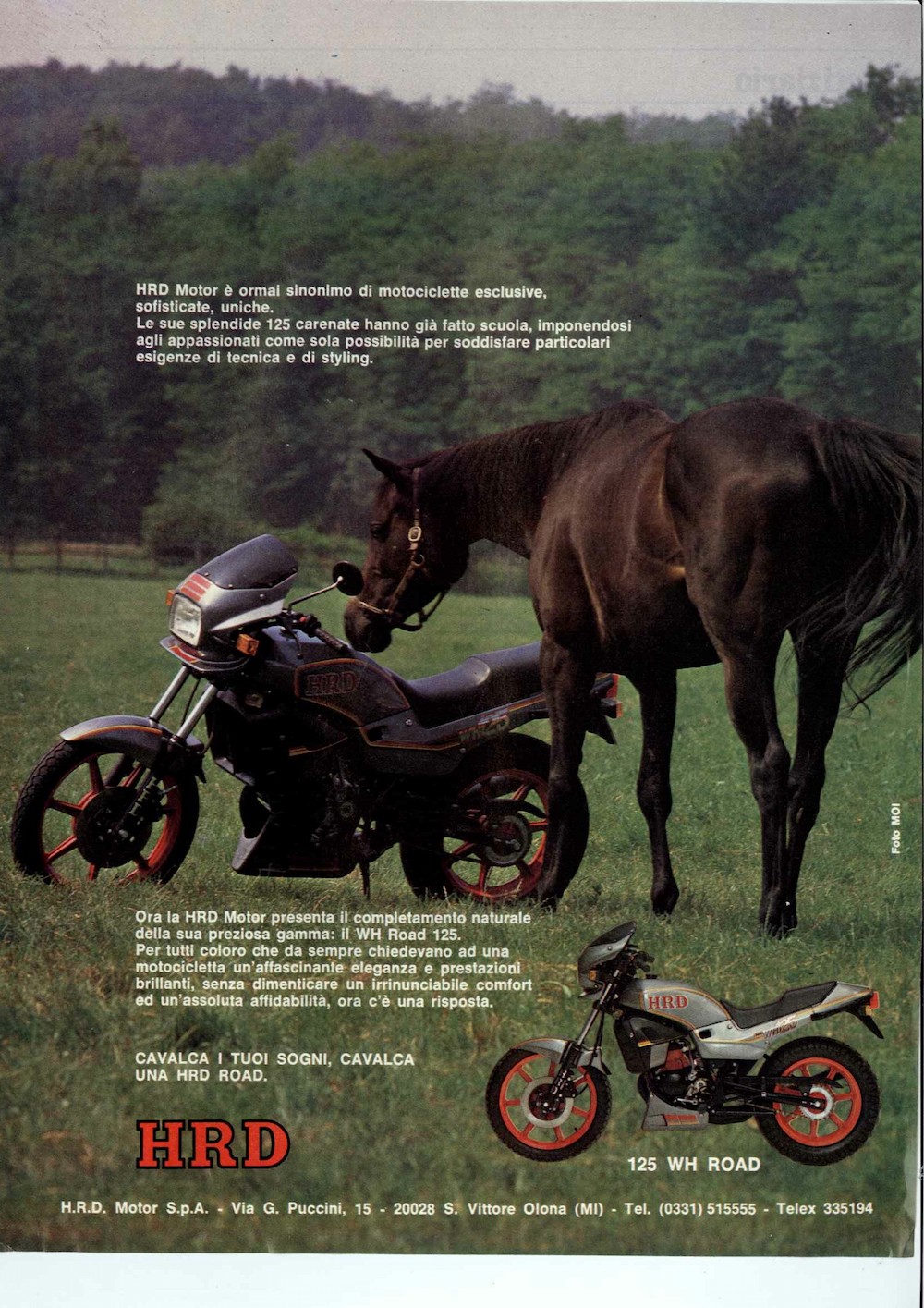 Latest model produced by HRD. Basically a touring version of the Road, also equipped with a Philips cassette player stereo and two speakers. Very few were produced. HRD closed its history and in October 1985 went into receivership, to be liquidated in May 1986. 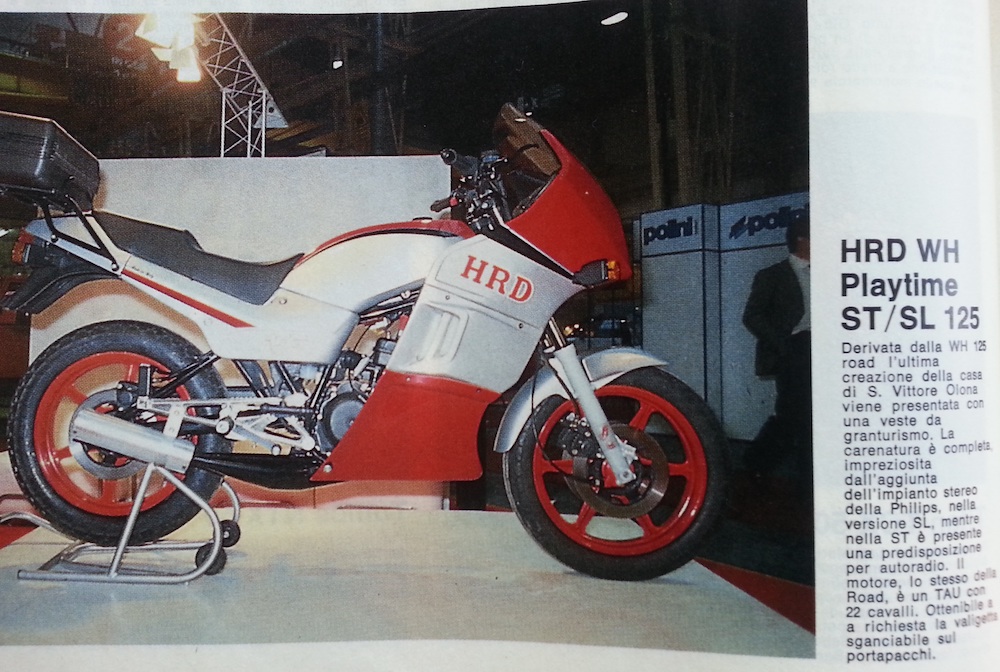