We would like to thank Francesco Lombardo for his fundamental contribution in writing this article dedicated to the only 125cc motorbike of the 1980s produced by Malaguti. 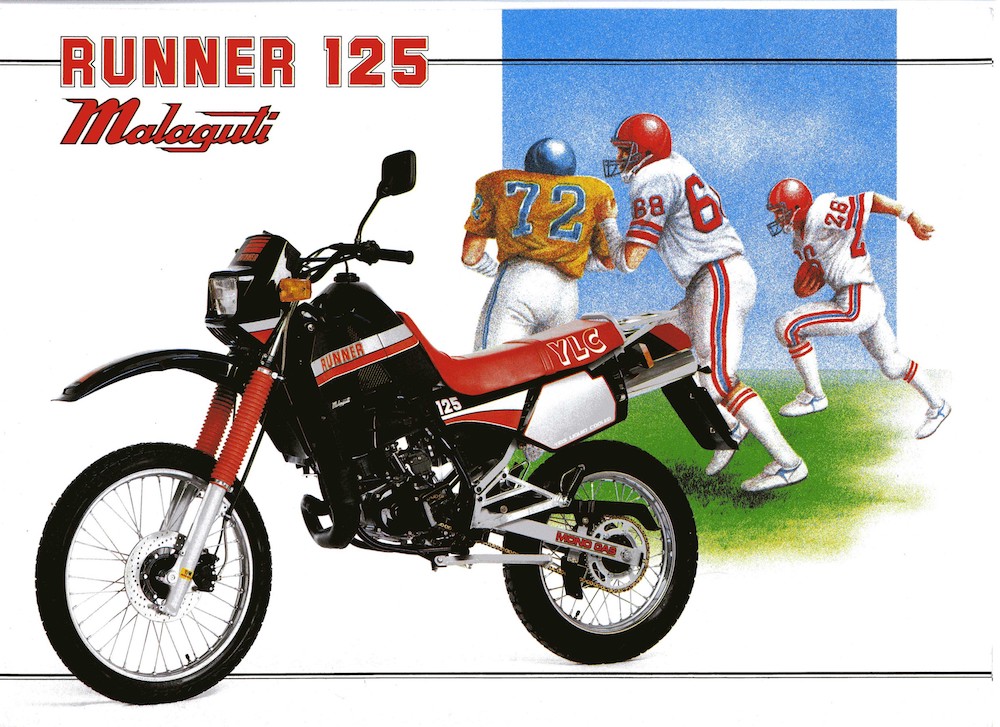 The Runner 125 was produced from 1985 to 1986. At that time Malaguti only produced 50cc motorbikes and was a leader in the sale of big tubes, so it decided to enter the 125cc segment, which was growing considerably in those years, and reached a commercial agreement with Minarelli. Minarelli already produced an engine to Yamaha specifications for the Yamaha DT 125 enduro bike, so an agreement was reached between Malaguti, Minarelli and Yamaha.

This enduro bike, named YLC (Yamaha Liquid Cooled) because of the engine model and the inscription on the seat, was equipped with a sophisticated six-speed liquid-cooled two-stroke single-cylinder engine - identical to the unit mounted on the Yamaha DT 125 - with YEIS (Yamaha Energy Induction System) reed valve, automatic mixer and Dell'orto PHBL 25 BS carburettor that developed 17 hp at 7500 rpm and could push it to over 120 km/h. The only pity was the lack of an electric starter, considered superfluous on an enduro, but still a technical feature that was sure to appeal to young people.

The feature that set it apart among the enduros of the time was undoubtedly the dual exhaust silencer, unique among 125cc enduros.

The bike cost 3,300,000 liras and was aesthetically similar to the 50cc MFX or MGX or MDX, the frame and many components were the same as those of the 50cc enduro models, but they varied:
1) the rear frame designed to have the passenger footrest attachments;
2) the longer seat to accommodate the passenger;
3) the side panels;
4) the rear shock absorber.

The front fork was tele-hydraulic with advanced pivot sliding on bushings and 36 mm stems, with light alloy sheaths, at the rear the classic swingarm in square steel tubes with mono Cross suspension with continuous adjustment. The braking system had a 230 mm disc at the front served by a double-piston caliper and a classic 125 mm drum at the rear. The wheels were 3.00×21 at the front and 4.60×17 at the rear. The declared weight was 120 kg. 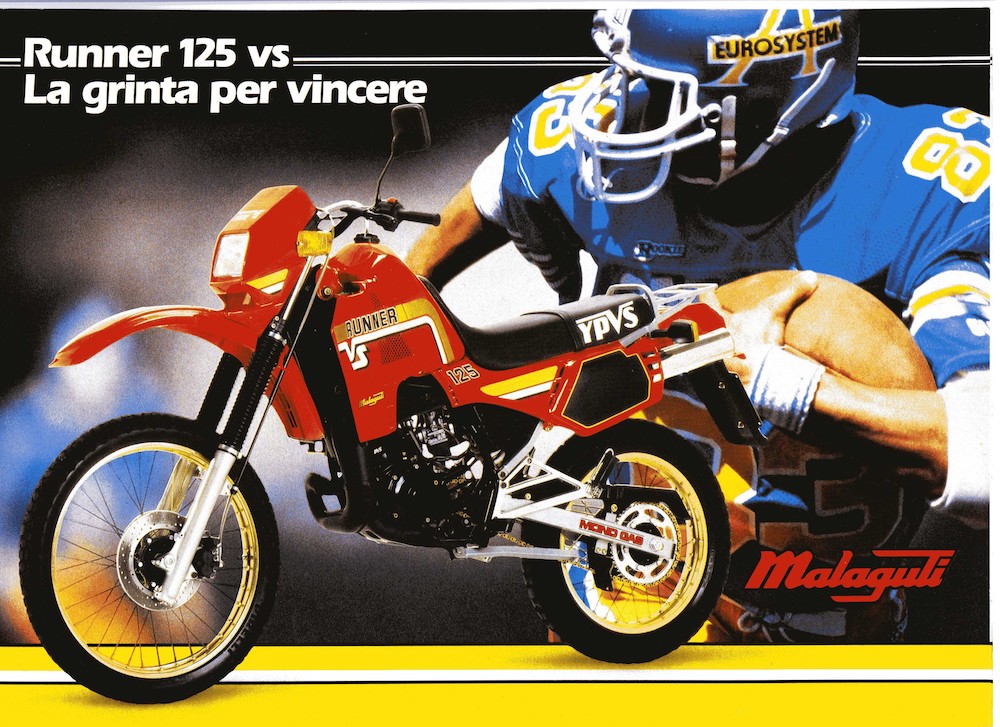 In the early months of 1986 two-stroke technology evolved and Yamaha, who had a lot of experience in the racing world, held a patent since 1983, which was the YPVS exhaust port valve, or Yamaha Power Valve System. Yamaha updated its 125 engines with this type of valve and as a result Malaguti also updated its Runner with the new engine. It is worth noting that Yamaha was the first 125 to adopt an electronically controlled electric servomotor valve system, ahead of its competitors by two years, who were stuck with the mechanical or pneumatically controlled valve for Aprilia. This feature made the Runner Vs not only a technologically advanced motorbike but also (together with its cousin DT 125) the forerunner of the 125 engines with exhaust valve. With this innovation, the cylinder could adopt a more powerful distribution diagram, while maintaining improved usability in the low and mid-range when the valve was closed, thus partialising the exhaust gases. The manufacturer claimed 22 hp at 9000 rpm and a top speed of 130 km/h, top performance for those days.

Otherwise there were no changes to the previous model. This version remained on the market until mid-1987. 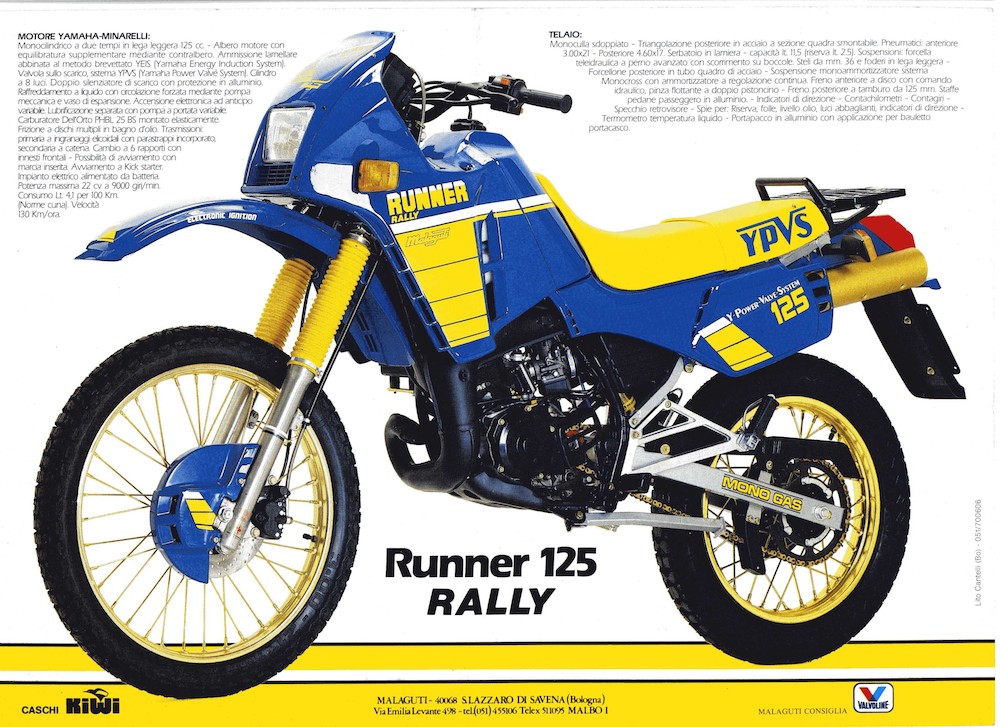 In March 1987 Malaguti updated the Runner, but unlike the previous Vs version which had a new engine and therefore a totally new version, this version only received cosmetic updates. The name becomes Runner Rally and will be accompanied by the Vs for a few months, it was sold at 3,954,000 liras, aesthetically similar to a first series Dune.
More than a real update one can think of it as an operation made, in a certain sense, to "recycle" the fairings of the Dune model, still pleasing in line and design.

The main differences to the Vs, apart from the front fairings, are:

This version sold a fair number of units and remained on the market until the end of 1988, then it was updated with a low front mudguard like the 50 Mrx, but otherwise identical to the previous one. It would remain in production until the end of 1989, but on the market until early 1990, when Malaguti would definitively withdraw from the 125 sector.
It should be noted that in the year the Runner was withdrawn from the market, it was obsolete in terms of frame, chassis and design, but still had a technologically more than valid engine, which shows how innovative the Yamaha engine with YEIS and YPVS system was in 1986. 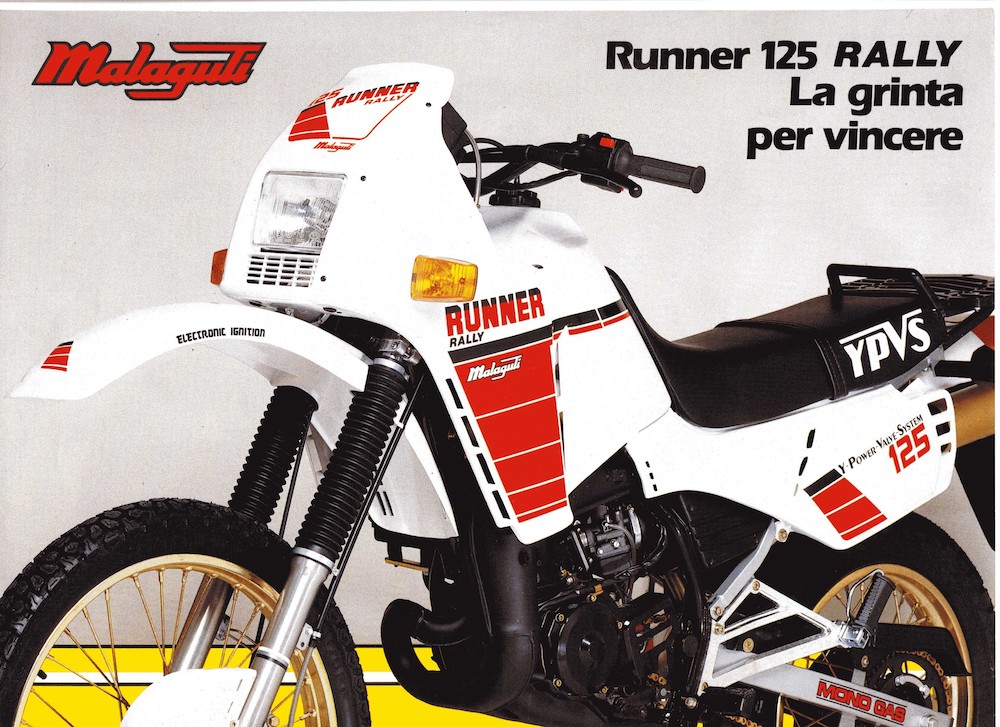