1984 - STX 125 - type STX 125
Presented at the Milan Motor Show in November 1983 and marketed from March 1984, the STX is a fine example of the creativity and commercial sensitivity of Aprilia's men who, without wasting time, transformed the ST125 into the bike it perhaps should have been. The STX is, in fact, updated just where the ST had been [...] 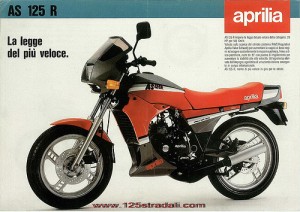 1985 - AS 125 R - type AS-R 125
Presented in Gardone Riviera in May 1985 and marketed soon after, the AS125 R, where R indicates the presence of the new Austrian Rotax engine instead of the previous Hiro, is the last update of the ST/STX series before the advent of the revolutionary AF1. The AS-R in fact evolves little from the STX as far as aesthetics and chassis are concerned, [...]. 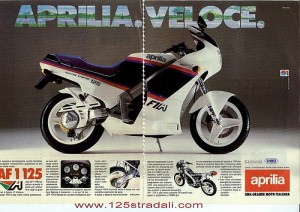 1987 - AF1 125 PROJECT 108 - type AC1
Presented in its final configuration at the Bologna Motor Show in December 1986 and marketed from April 1987, the AF1 125 Project 108 marked Aprilia's official entry into the latest generation of eighth-litre engines. Compared to the previous AS-R, the Project 108 only had the valid Rotax 127 engine in common, which however [...] 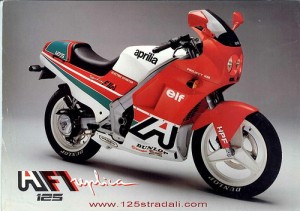 1988 - AF1 125 PROJECT 108 '88 - type AC1
Presented at the Milan Motor Show in 1987 and marketed in December 1987, the new AF1 Project 108 Super and Reggiani Replica were a slight restyling of the AF1 Project 108 presented a year earlier and differed only in their colouring. Equipped with a new fairing with a beautiful double headlight (finally

1988 - AF1 125 SINTESI - type EH
Presented on 8 June 1988 in Sardinia and marketed immediately afterwards, the AF1 Sintesi is perhaps the 125 road bike that more than others contains so many technical innovations in a single package. The 1988 is a fundamental year for the Italian houses engaged in the production of eighth of litre: never as in that year they see news [...].

1989 - AF1 125 SINTESI '89 - type EU
Presented on 3 December 1988 at the Bologna Motor Show and marketed in May 1989, the AF1 Sintesi '89 took over from the previous Sintesi just six months after its presentation. The 1989 Sintesi is one of those motorbikes that does not go unnoticed. With a few targeted changes, the perfect one was perfected. The beautiful [...] 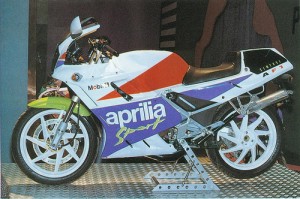 1990 - AF1 125 SINTESI SPORT - type FG
Presented on 18 October 1989 and marketed immediately afterwards, the AF1 Sport is the swan song of the Sintesi series. The green-coloured front mudguard. This was enough to bring the AF1 Sintesi Sport back to the memory of those who followed the evolution of the 125 stradali with their noses pressed to the magazines! On the other hand, if the [...] 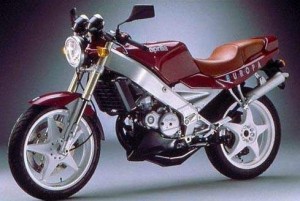 1990 - AF1 125 EUROPA - type FV
Presented at Noale in April 1990 and marketed soon after, the Europa shared chassis and engine with its sister AF1 Futura 125, but for the first time Aprilia presented a 125 road bike without any aerodynamic appendages and only in elegant metallic amaranth or metallic electric blue single-colour livery. With the Europa Aprilia [...] 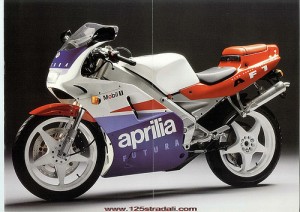 1990 - AF1 125 FUTURA '90 - type FM
Presented on 5 February 1990 and marketed immediately afterwards, the AF1 Futura was the 1990s evolution of the successful AF1 Sintesi project. 1990 was the year that saw the birth of the 125 sports bikes, i.e. characterised by a more racing-oriented riding style compared to the stradali produced until then. In this field, Gilera sets the trend [...] 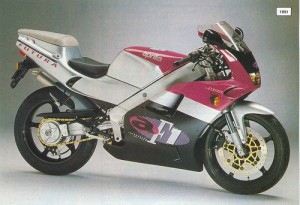 1991 - AF1 125 FUTURA '91 - type GE & GR
Presented and marketed in the early months of 1991, the new Futura '91 had only the name in common with its predecessor. From a technical point of view, the AF1 Futura '91 adopted substantial modifications that were not limited to the superstructure - only apparently similar to the Futura '90 - but also involved the [...] 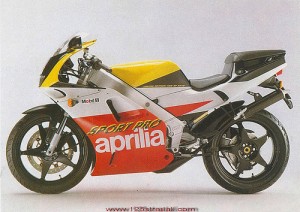 1992 - RS 125 EXTREMA '92 - GS type
Introduced in Spring 1992 and marketed from June onwards, the RS 125 Extrema replaced the previous AF1 series, which reached its peak with the Futura Sport Pro, presented shortly before the Extrema. The Extrema is a new bike compared to the Futura and in addition to a new beautiful [...] 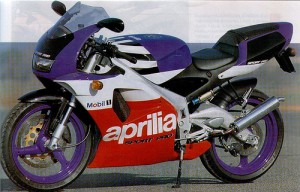 1993 - RS 125 EXTREMA SPORT PRO '93 - type LA
Presented at the Milan motor show in November 1992, the RS Extrema Sport Pro officially took the place of the Futura Sport Pro in the Sport Production championship, winning the title at the end of the season in the under 21 category with Roberto Locatelli and the over 21 category with Giacomo Guidotti. The Sport Pro '93 maintains the [...]

1993 - RS 125 EXTREMA '93 - GS type
Presented at the Mugello racetrack in May 1993, the RS Extrema '93 differs from the '92 version mainly because of the new colours adopted: plum/black/grey very similar to the previous one, but with differently matched colours and "RS" lettering in blue and an original yellow/petroleum/white. The Reggiani Replica version keeps the known colouring, but adopts painted rims [...]. 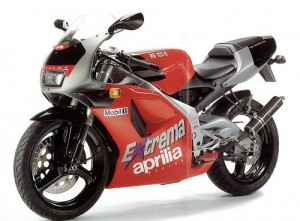 1994 - RS 125 EXTREMA SPORT PRO '94 - type LA
Presented at the Bologna Motor Show in November 1993, the RS Extrema Sport Production '94 officially took the place of the '93 model by introducing a new Replica colour in the series production, this time combined with a sponsor and not with a particular driver. The Chesterfield Replica colour was in fact used for the first time in the [...]